by Kelvin Omachonu
in News, NewsNow
0

The Hungarian champions already swooped in for one Nigerian in the January transfer window, but they have now added another Super Eagles star

The 27-year-old defensive midfielder left former Greek champions PAOK after failing to pin down a place in the team. Esiti, who started his career in Portuguese side Leixoes, joined PAOK in the summer of 2019.

But he struggled to get enough game time as he made just twelve league appearances in his first season. Last season, he had to leave on loan to the Turkish side Goztepe.

Esiti returned from a six-month loan deal last summer, but nothing changed. The former Gent man made only nine league appearances from a possible 22 for PAOK.

However, he will look to change his fortunes in Hungary after Ferencvaros secured his services for 1million euros. 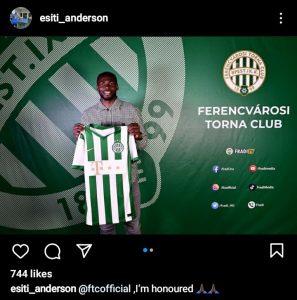 Ferencvaros played in the Champions League this season, but they were knocked out in the group stages. They currently sit on top of the Hungarian league.

Esiti has played three games for the Super Eagles. He made his debut in 2015 in an Africa Cup of Nations qualifier against Chad.