The Nigerian midfielder has been magnificent this season, and he continues to get the plaudits he deserves

Everton were yet to win after six Premier League games, picking four draws and losing two. Some of the fans would have felt hard done by especially as the toffees had consistently churned out impressive displays.

However, they had cause to smile on Sunday after a hard-fought victory against West Ham.

Super Eagles midfielder Iwobi has been one of the most-improved players in the English top-flight this season despite playing in a new position in midfield.

The 26-year-old continued with his brilliance against the hammers, and his contribution made the difference for the Merseysiders.

Iwobi’s assist for Neal Maupay’s 53rd-minute was enough to seal the deal for Everton. In fact, his brilliance earned him the Everton fans’ player of the match accolade.

Well, Iwobi’s displays have also been recognized by one of the greatest strikers to ever grace the pitch.

Premier League highest goalscorer Shearer included Iwobi in his team of the week for game week 8. 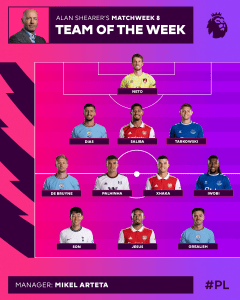 Iwobi is currently in the Super Eagles camp in preparation for the friendly games against Algeria on September 27. He would look to continue with his brilliance when Nigeria take on the Foxes in Oran.