Super Eagles star named in Carabao Cup Team of the Round

The Super Eagles star has continued to dish out outstanding displays for his team, and he has gotten recognition for his performance

Super Eagles midfielder Alex Iwobi has been named in the English Carabao Cup Team of the Round of 32.

Iwobi has had an outstanding year so far. In fact, 2022 has been a year of resurgence for the Nigerian midfielder. Iwobi’s brilliant displays began last season, as he fit in perfectly into his role at fullback and played a big role in his side’s Premier League survival last season.

This season, the 26-year-old midfielder has taken it a notch higher. Everton boss Frank Lampard has given him a new midfield role. Iwobi in turn has not disappointed, as he has been one of the best players at Goodison Park so far.

The former Arsenal man dished out yet another scintillating performance for Everton in their 1-0 Carabao Cup victory at Fleetwood on Tuesday.

Iwobi assisted Demarai Gray’s 28th-minute strike, which turned out to be the vital clincher. Asides from his assist, Iwobi recorded an 85 percent pass accuracy, 77 touches(more than any player on the pitch), four key passes, and eight accurate long passes.

The Carabao Cup via its twitter handle shared its player ratings as per Whoscored, and Iwobi completes a midfield trio, alongside Steven Alzate(Brighton) and Mateusz Klich(Leeds United). 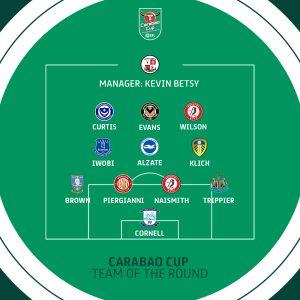 Everton trade tackles with Bournemouth in the round of 16, and Iwobi would look to show his quality again.