Chelsea legend Didier Drogba is the latest big name to praise former Nigeria captain Austin Jay-Jay Okocha. The 2012 Champions League winner with Chelsea took to his Instagram to praise Okocha with the caption ‘My Number 10. 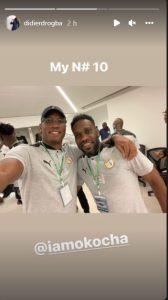 Drogba posted himself and Okocha with the caption ahead of the African legends match against former Senegal players to celebrate the inauguration of the 50,000 world-class Abdoulaye Wade Stadium in Senegal.

The former Nigeria captain showed why he is highly revered by his colleagues as he scored the equaliser for the African legends after Khalilou Fadiga had put Senegal ahead with a brilliant strike.

Both Drogba and Okocha joined a host of other African legends, including Emmanuel Eboue, Samuel Eto’o, Patrick Mboma, Asamoah Gyan, Emmanuel Adebayor and others to play against a Senegalese team full of former internationals.

The ex-Galatasaray man is not the only former player who has praised Okocha in recent times. Cameroon’s FA president and former Barcelona striker Eto’o also said Okocha would’ve been put on the same pedestal as Ronaldinho if he was not African.

Ronaldinho himself had also said in the past that the ex-Bolton man was one of the No. 10s he admired during his playing career, while ex Liverpool striker Peter Crouch once said he could watch the Nigerian all-day.

Okocha was one of the gifted players Africa has ever produced. The 48-year-old represented Nigeria 73 times, winning the 1994 Africa Cup of Nations and the gold medal in the football event of the Atlanta 1996 Olympics.

He played for clubs like Eintracht Frankfurt, Fenerbahce, PSG and Bolton during his career.