Ter Stegen Set For Liga Debut As Bravo Gets Injured 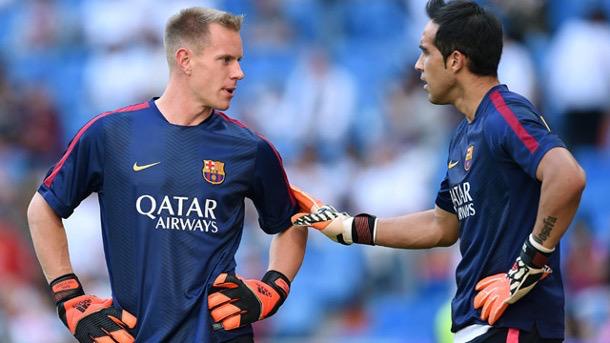 Barcelona goalkeeper Claudio Bravo couldn’t finish Monday’s training session with the club as he pulled out with a knock. After series of tests were carried out on the player, the Barcelona medical staff announced that the 32-year-old Copa America winner had sustained a Calf muscle injury but the length at which he will be sidelined through the injury wasn’t stated.

The injury means the goalkeeper will miss Barcelona’s next game in La Liga against Diego Simeone’s Atletico Madrid team at the Vicente Calderon on Saturday, a fixture that may see German goalkeeper, Marc Andre Ter Stegen make his first ever Liga appearance for the Catalans since he joined the club last summer.

Claudio Bravo and Ter stegen joined Barcelona last summer and the German picked up an early injury which gave Bravo a starting berth in La Liga. His impressive run saw him go eight straight games without conceding a goal and he earned himself the first choice spot in the League, however, Ter Stegen was in charge of the UCL.

Bravo was in between the sticks for Barcelona in 37 Liga games last season after he was rested in the final game and was replaced by Jordi Masip. The goalkeeper started Barça’s two games this season but is likely to miss at up to 4 weeks of action with the injury as reports suggest, giving Ter Stegen a glorious chance to prove his quality in Barça’s goal.

The injury means Bravo will have to wait before he breaks the record of going more than 754 minutes without conceding a goal in La Liga, a record which the former Real Sociedad man would have broken if he survived the first 35 minutes at the Vicente Calderon.

Claudio Bravo was very impressive for Luis Enrique’s team last season as the Chilean captain conceded just 19 goals in a massive 37 League games, a feat that saw him win the Zamora Trophy for conceding the least number of goals in the league. He kept 23 clean sheets in the process beating the previous club records set by Victor Valdes and Andoni Zubizarreta.

Luis Enrique will surely miss one of his most important players but still have Marc Andre Ter Stegen and third keeper, Jordi Masip to do with as the length of the player’s injury wasn’t made public.