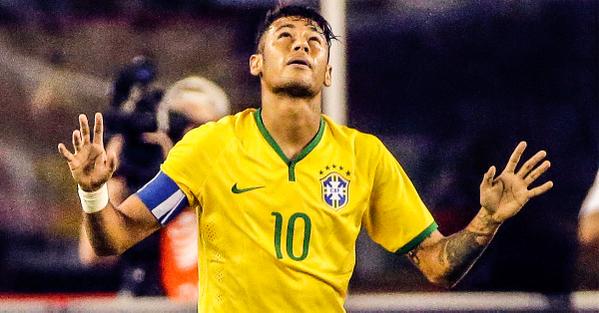 Featuring in their final games of the international break, seven Barcelona stars were all involved in games for their various nation on Tuesday. Neymar and Rafinha Alcantara played in the Seleccao’s 4-1 drubbing of the United States, Lionel Messi and Mascherano were starters for Argentina in their 2-2 comeback draw versus Mexico, while Iniesta, Pique and Sergio Busquets helped Spain get a scrappy 1-0 win over Macedonia in the Euro Qualifiers.

Brazil took on Jorgen Klinsmaan’s USA in a friendly game in Fanborough and it was just too easy for the Neymar-led team. Captain Neymar alongside Rafinha started on the bench and it didn’t take long for Dunga’s men to get the opener as Zenit St Petersburg striker Hulk scored on the 10th minute to give Brazil the lead.

The game ended 1-0 at half-time and Neymar was introduced just at the start of the second half. The Barcelona man, who will miss Brazil’s next two official games through suspension, made his presence felt just 5 minutes later after winning a penalty. He kept his composure to coolly finish the resulting spot kick to make it 2-0 for Brazil.

Youngster Rafinha Alcantara who made his debut in Brazil’s last game, was brought on on the 60th minute and the star got his first international goal moments later as he fired past the USA goalkeeper after good works from Lucas Moura.

Neymar, who was in blissful form then scored Brazil’s fourth of the night after he blasted a shot to the near post after cutting in from the left, the goal was from another assist from Paris Saint Germain’s danger man, Lucas Moura.

Rafinha could have secured a brace but shot wide off the post in a glorious chance presented to him from a Fabinho pass while Neymar couldn’t get his hat-trick after a beautiful curling free-kick just hit the side netting. Dani Williams later got a consolation goal for the USA but Brazil will go home smiling as they got their 10th consecutive win against their opponents.

Argentina came back from two goals down to draw 2-2 against Mexico in Texas, thanks to a dazzling display by captain Lionel Messi. The Barça talisman netted a brace for the Albiceleste in their 7-1 win over Bolivia despite playing just 25 minutes. The star was giving a starting berth this time alongside teammate Javier Mascherano.

Gerardo Martino’s side were dominant in every aspect but saw themselves trailing after Javi Hernandez got the opener for Mexico on the 19th minute. They came out with full attack to get the equaliser and were given a tough match by the inspired Moises Munoz who was in goal for the Mexicans.

Mexico then went two goals up after Hector Herrera scored on the 70th minute but it was Argentina who would have the last laugh. Lavezzi capitalised on a dreadful mistake by Munoz to tee up Aguero in the box, who tapped in to make it 2-1 before the Manchester City striker assisted Messi to make it 2-2 on 89 minutes through a wonderful strike.

Elsewhere, Barcelona stars Gerard Pique and Sergio Busquets played the whole game for Vicente del Bosque’s Spain team who beat Macedonia 1-0 to cement their top spot in the group. Andres Iniesta was a late substitute while Jordi Alba and Marc Bartra didn’t feature. The win, courtesy of a Joan Mata goal, means Spain just need two points from their final two games of the qualifying round to automatically qualify for the tournament with their next game against Luxemborg at home, a likely three points.