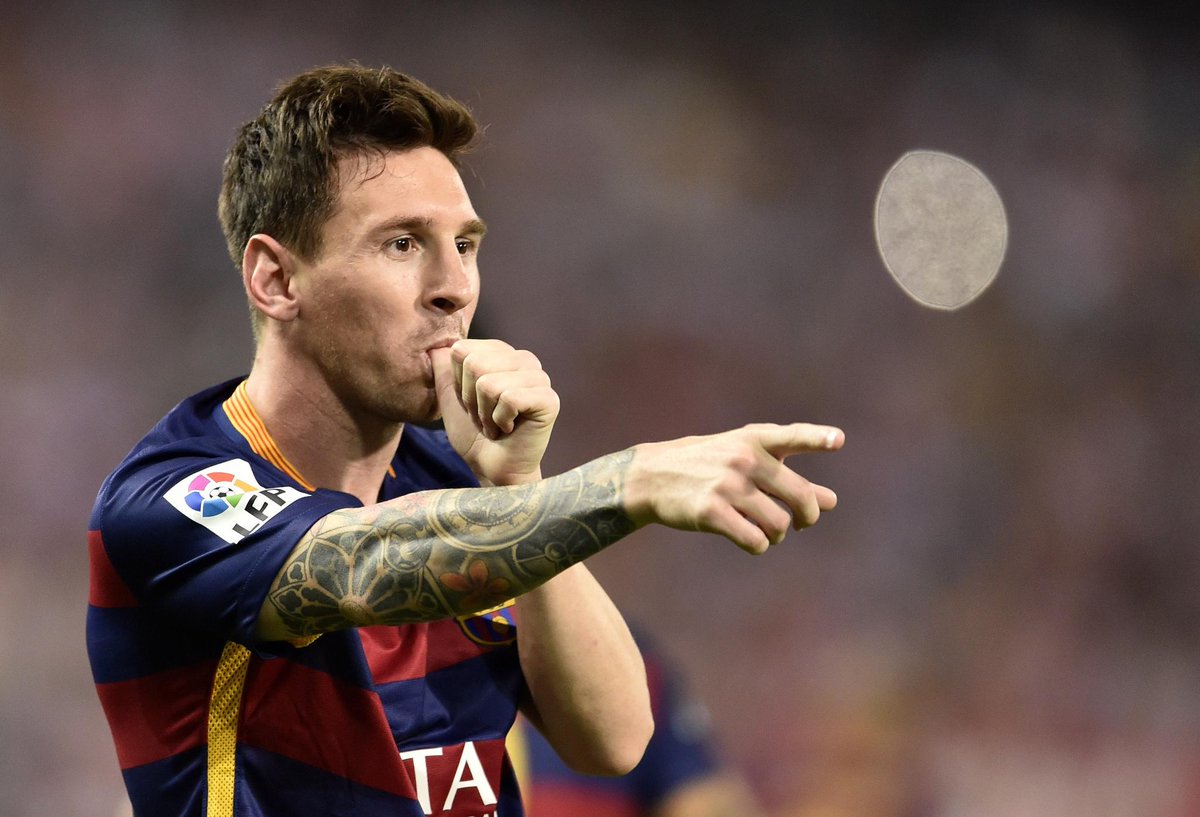 FC Barcelona maintained their 100 percent record in the 2015/2016 La Liga campaign as they beat Atletico Madrid 2-1 at the Vicente Calderon to continue their magnificent record over the Madrid team.

Fernando Torres got the first goal of the game in the second half before Neymar equalised moments later from a direct free-kick and Messi came on as a substitute to round off the scoring in the 77th minute to give Barcelona their 9th point from a possible nine.

Luis Enrique opted for a shocking line-up that saw Lionel Messi start on the bench. The star welcomed his second son and was away with his family, missing Barcelona’s final training session ahead of the tie and was replaced by Rafinha Alcantara.

Diego Simeone’s men got the first chance of the game minutes after kick-off when Fernando Torres blasted a shot over the crossbar after being set up by Atleti’s right back Juanfran.

From that moment, Barça’s dominance emerged and they nearly got the opening goal on 15 minutes through midfielder Ivan Rakitic. Great work from Andres Iniesta saw the midfielder set up the Croatian with a side-footed pass on the right, but the former Sevilla man’s powerful shot was wonderfully kept out by Oblak.

Luis Enrique’s men continued to dominate possession and thought they had broken the deadlock in the 25th minute through Luis Suarez, only for Oblak to deflect the Uruguay international’s shot from close range onto the crossbar with a superb reflex.

Barcelona came close ones again to opening the scoring on the 35th minute. Substitute Jeremy Mathieu, who replaced the injured Vermaelen on 22 minutes, found Luis Suarez with a long ball who diverted the ball to Neymar, only for the Brazilian attacker’s attempt to be blocked with some shouts claiming it was a handball.

The game ended 0-0 at half time and Atletico started the second half with more determination. They had shouts for a penalty when Javier Mascherano handled Fernando Torres’ cross from the right, but referee Mateu Lahoz waved it off.

The Calderon went gaga minutes later when the Colchoneros got the opener. Tiago opened up the Barcelona defence with a sublime pass from the right that found a free Fernando Torres in a one-on-one situation with Ter Stegen and the Spaniard coolly slotted home to make it 1-0 for the home side.

Barcelona didn’t waste time to even the scoreline as they equalised two minutes later when Neymar bent a wonderfully stricken free-kick from 25 yards to beat Oblak, 1-1.

Neymar’s equaliser opened up the game and gave the visitors more confidence to attack, then Luis Enrique brought on Lionel Messi to replace Ivan Rakitic. The Argentina international bossed the game from that moment and did not need long to make his presence felt as he played in a wonderful through ball minutes later to set Neymar up on the wing, but the Brazilian’s goal-bound shot was handled of the line and Mateu Lahoz hesitated in pointing to the spot.

Luis Suarez then set up the Barça talisman in the 77th minute from the wing and the 28-year-old made no mistake as he side-footed a superb finish despite being double-marked to beat the helpless Oblak and give Barcelona a precious win, his first goal of the Liga campaign and it was dedicated to his new son.

The win means Barcelona have nine points from a possible nine and sit top of the Liga log securing three wins in three, they prepare for Wednesday’s UCL clash against AS Roma before returning to Liga action next week at the Camp Nou against Levante.

Samuel Kalu Helps Bordeaux To A Shock Win Over Rennes