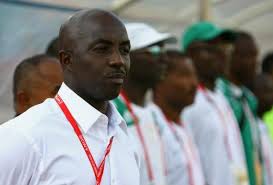 The Nigeria U23 team, the Dream Team VI, will have to scale past Burkina Faso to make it to the finals of the men football event at the ongoing All Africa Games in Congo.

Burkina Faso’s U23 emerged as the semi-final opponents for Nigeria after a forced lucky dip on Monday saw them becoming the runners up in Group A ahead of Sudan.

Both Burkina Faso and Sudan had scored and conceded two goals in their first two Group A outings before playing a goalless draw in their final tie on Sunday, to finish perfectly level on four points apiece, two adrift of hosts and group leaders Congo.
[post_ad]
With the logjam, the only way to separate the two teams was by drawing of lots, which saw the Burkinabe emerging as the luckier of the two teams.

The stage is now set for the Young Stallions to battle Group B winners Nigeria for a spot in the final on Tuesday, while hosts, Congo, who finished tops in Group A, would be facing Group B runners-up Senegal in the other semi-final the same day.