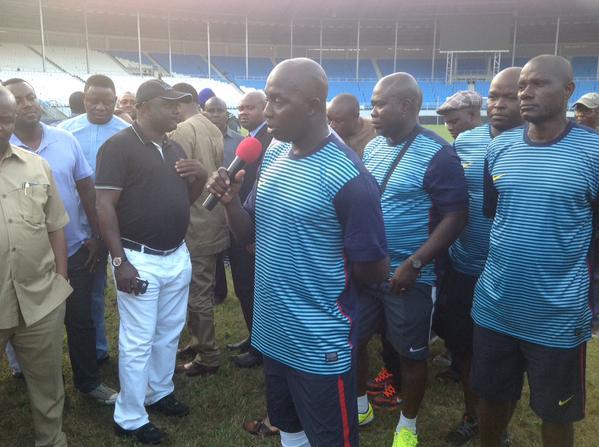 Head Coach of the U-23 National Team, Samson Siasia has selected 18 players for Sunday’s African U-23 Championship final round, first leg qualifier against Congo, in Port Harcourt.
The encounter coming up at the Adokiye Amiesieamaka Stadium, Port Harcourt will see the team parading old reliables like goalkeeper Emmanuel Daniel, Oghenekaro Etebor, Taiwo Awoniyi, Azubuike Okechukwu, Erhun Obanor and Godwin Saviour, with new faces Umar Aminu and Musa Yahaya making the cut.
Addressing the players, Siasia urged those who did not make the 18 -man list not to feel bad, but to see it as a challenge to up their game and make future lists. He told those who were selected to see their selection as a privilege and should show to the world that they were selected on merit.[post_ad]

“I want to charge those of you selected to see this as a rare privilege knowing that millions of Nigerians are banking on you to put smiles on their faces comeSunday. I have the confidence that you guys can beat Congo, but all that will depend on you guys showing that on the field of play. The Nigeria Football Federation and the Rivers State government have done so much for us to make us win, so it’s now left for us to let them know that we are true ambassadors of our country.”