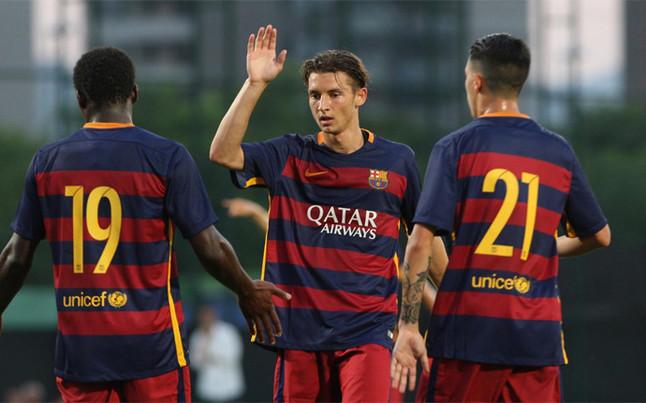 Goals from Maxi Rolon, Aitor Cantalapiedra, Jean-Marie Dongou and Babunski gave Barcelona B a comfortable 5-1 win over Terrassa as they make it three big wins from three in pre-season.

Alejandro Grimaldo was back in the squad after returning from injury and the Captain of the day played as a winger instead of his natural left-back position.

Bicho, Adama Traore and Camara didn’t make the squad due to injuries and Coach Gerard Lopez starting Huertas, Ros and Enguene in midfield with Amir joining Rolon and Grimaldo in attack.

Terrassa got the party started as they opened the scoring on 28 minutes but the Catalan giants equalised 10 minutes later through the on-form Maxi Rolon who scored his 7th goal of the pre-season.

It ended 1-1 at the break then Gerard Lopez made 10 substitutes with Huertas the only starter still on the pitch, from then, things started going smoothly for Barca B.

Jean-Marie Dongou made it 2-1 just 5 minutes into the second half before fellow substitute Aitor added a third one minute later.

Barca continued bossing the game but had to wait until 85 minutes to add a fourth as Dongou grabbed his brace with Babunski wrapping things up on 90 minutes to give Barca a comprehensive 5-1 victory.