The Nigerian striker was brilliant for La Dea, but his effort was not enough, as they lost their heads in the final quarter

Super Eagles forward Ademola Lookman scored for Atalanta, but his effort was insufficient as they succumbed to a 2-2 draw at Udinese.

Atalanta were looking to beat Udinese and usurp Napoli at the top of the Serie A log when they traveled to the Dacia Arena.

However, it was never going to be an easy task, as Udinese have proven their quality this season, proof of which was an impressive eight-game unbeaten run.

La Dea were the better side from the start, but it took them 36 minutes to break the deadlock. Luis Muriel played Lookman through on goal, and the Super Eagles forward showed great technique and smashed the ball into the roof of the net to give his side the lead. 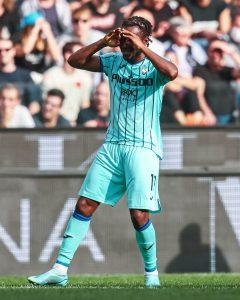 Atalanta took their lead into the break, and within eleven minutes into the second half, Udinese defender Udogie committed a foul in the box.

Luis Muriel did not make any mistakes from the spot, as he sent the ball into the bottom left corner.

However, after going two goals up, La Dea lost their heads. Success was introduced into the game, and his physical presence yielded fruits for Udinese.

The Bianconeri pulled one back through Gerard Deulofeu, who scored a spectacular free kick.

Then in the 78th minute, Argentine Roberto Pereyra sent a teasing cross into Atalanta’s box, and his countryman Nehuen Perez jumped highest to send a well-placed header past Sportiello to make it 2-2.

Atalanta tried to regain their lead but lacked the cutting edge, and they had to settle for the 2-2 result.

The win takes Atalanta to the top of Serie A pending the result of Napoli’s fixture at Cremonese.

For Lookman, the 24-year-old is proving to be one of the best signings of the season, as he has now scored two consecutive goals for Atalanta, in crucial games.