The Nigerian forward has been brilliant for the Moscow giants in the last two seasons, but he now has the opportunity to show his ability in mainstream Europe

Ejuke was brilliant for CSKA Moscow since he joined the club from Heerenveen two seasons ago. The Super Eagles forward was the major outlet in attack, wreaking havoc in defenses and running opponents ragged.

The 24-year-old recorded ten goals and eight assists in 55 league games for the Moscow giants.

However, Ejuke will have the chance to show his brilliance in one of Europe’s top leagues next season.

Hertha Berlin announced via their twitter page that they had secured Ejuke’s services on a season-long loan. 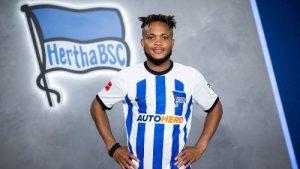 Ejuke’s arrival could be helpful to the Alte Dam, as he is filled with pace and trickery on the ball.

Hertha Berlin scored a miserly 37 goals in the Bundesliga last season- the third lowest in the league. But with the arrival of the Zaria-born Super Eagles star, that could change.

Fredi Bobic, Hertha Berlin boss believes that Ejuke could add a lot of bite to his attack, and is excited at the prospect of working with the Nigerian.

“Chidera(Ejuke) has proved himself in several European leagues already,” Bobic said via the club website.

“He brings good skills alongside speed and versatility. We’re sure that he’ll improve our game with his abilities,” Bobic added.