On the 21st of July, the winner of the 2022 CAF Player of the Year award will be announced and nominees for the prize have been revealed on Thursday.

Only one Super Eagles player, Moses Simon made it into the nominees list which had 30 footballers from 13 African countries with Senegal, Egypt and Morocco the most represented.

Nigeria, with the highest number of professional  footballers in Africa had as many nominations as Comoros. A slight on the country in many ways, but also a call for an inquest into CAF’s choices.

Nigerians have since reacted in various ways to the nominations with many positing that more Super Eagles players have done enough in the last one year to be considered as one of the best 30 players on the continent.

The 2022 Men’s Player of the Year award nominations have been largely influenced by the  2021 AFCON in Cameroon. The nominees reflect the tournament and there has been no recourse to these players’ performances at the club level, except in situations an omission will be a grand irresponsibility from CAF’s side, as in Riyad Mahrez’s nomination.

CAF has no standard rationale for player nominations

Didier Drogba was denied a CAF Player of the Year award in 2007 reportedly because he was not present at the ceremony, with Frederic Kanoute rather presented with the prize. Many players had complained about the timing of the event as it clashed with clubs’ schedules.

On such occasion, the understanding of CAF’s rationale wasn’t clear in all its ramifications.

John Obi Mikel came close when he lost to Yaya Toure in 2013, despite the Super Eagles’ AFCON feat and Mikel’s good showing. Nigeria dominated that award ceremony in Lagos and won virtually everything but the biggest prize on the night to the disappointment of many. Nigeria eliminated Ivory Coast from the AFCON that year and locals felt that was an award that clearly showed CAF’s struggle with its own rationale.

Every year an AFCON comes up, CAF displays its confusion as to its rationale for player selection.

An AFCON can be one of the reasons why players can be selected for an award but nothing justifies why it should be the overriding reason for selection, especially when there’s no consistency in certain situations.

While the 2022 prize may not fully expose this confusion, as potential final nominees Sadio Mane and Mohamed Salah have both star power and went farthest at the AFCON, the overall nominations exhibit this absence of standard without holdback.

The argument of Star Power

Since 1999 when Kanu Nwankwo won the African Player of the Year for the second time, no Nigerian footballer has won the award. Jayjay Okocha was pipped by Samuel Etoo twice to the award with a section of Nigerians still of the opinion that Okocha deserved at least one of the awards, especially in 2004.

Nigeria’s struggle since 1999 is a deviation from the rich presence enjoyed by Super Eagles players between 1993 and 1999. In those seven years, Nigerian footballers won the award five times as the country crowned itself as arguably the biggest African team of the 1990s.

What followed has been a downward trajectory in the quality of Nigerian footballers. Okocha, who twice came close to winning is also of the 1990s stock.

In 2008, when Emmanuel Adebayor won the CAF Player of the Year, he scored 24 Premier League goals as Arsenal’s title push got extinguished. In all competitions, he scored 30 and had the best individual return of his career to date. Despite that brilliant individual feat, Togo failed to make it to the 2008 AFCON.

Mohamed Aboutreika was the name on everyone’s lips as the deserving winner of the prize based on his MVP showing at that year’s AFCON, but CAF settled for the Europe-based and more popular Adebayor in a tournament year.

Other than Victor Osimhen, and to a greater extent, Wilfred Ndidi, the Super Eagles don’t have a football superstar in the context of global recognition.

These two are leaps and bounds ahead of every other Nigerian player and have proven themselves to be globally reputable footballers.

Simon, a Nigerian whose nomination is arguable to many was by far Nigeria’s best player in Cameroon but one could argue he’s not the best representative Nigeria can have in a major award rewarding players for their performance in the last one year.

Despite their big star power, relative to other Nigerian footballers, Ndidi and Osimhen are not considered big enough to get nominated even when they don’t perform or miss out of tournaments clearly used as the basis for selection. It is a reflection of their current stature.

Mahrez has enjoyed this as his Manchester City status may be difficult to ignore.

The Algerian had a poor showing at the AFCON as Les Fennecs failed to make it past the group stages of the competition, yet omitting him will make a mockery of the reasoning of the continent’s football governing body. He has the licence of involvement in those nominations by the basis of his stardom. By the mere presence of his name, game and club stature. That’s an influence no Nigerian player has today. 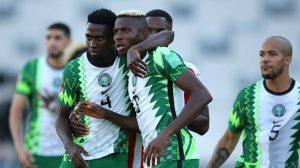 Osimhen and Ndidi may need more to get to this level of popularity especially in the face of unclear rationale to have considerations for these nominations.

In 2013 when Yaya Toure won the prize and Mikel was snubbed for the award despite having a better tournament, it could have been said to be by the star power of the Ivorian and his level of performance at the club level.

Nigeria as a country must strive more to produce players that will be of global recognition, by the basis of their talents, popularity and the level of their hard work and see CAF have no place to turn to even in its often confusing stance.