On the cusp of glory: Nigerian stars face different hurdles in race to European finals

The trio of Cyriel Dessers, Ademola Lookman and Kelechi Iheanacho will be involved this evening in the second leg of the semifinal of the Europa Conference League.

All three Super Eagles players will play for a place in the final of the competition and have an opportunity to vie for a European trophy.

Red-hot Dessers has been in the news all week as his scintillating form in Europe has ensured Feyenoord fans are pushing for his permanent signature.

With 10 ECL goals this season, he has scored more than anyone in the competition, and is an early favourite for the Most Valuable Player of the tournament award.

Dessers’ first leg brace was enough to help Feyenoord to a 3-2 win against Marseille at De Kuip. He was also adjduged the tournament’s Player of the Week.

Feyenoord will travel to the Stade de Velodrome, Marseille’s home ground bearing in mind that they’ll be at one of the most hostile grounds in European football.

What the Eredivisie side has shown in the competition so far is an ability to always find goals. Dessers has often proven to be the man coming up clutch and scoring 10 of Feyenoord’s 43 goals in the competition.

Against Marseille, they face an uphill task against a strong team of many technically-gifted players. Should they take the extra step and qualify for the final, Feyenoord can be sure they have come some way and will do all it takes to go home with something significant at the end of the season. 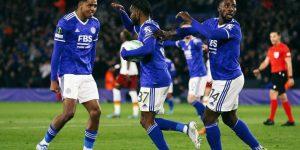 Ademola Lookman and Kelechi Iheanacho look most likely to be involved when the Foxes face Roma at the Stadio Olimpico.

Lookman saved the day for Leicester in the first leg scoring a vital equaliser that makes this fixture still balanced.

Roma have shown they can be beatable even at their best but Jose Mourinho will fancy a European final in his first time of asking.

Hugely experienced, Mourinho will lead his Roma army out to face the Foxes and hope they can pull a result against the former Premier League champions. Against his friend of almost 20 years, Brendan Rodgers, it is also expected to be a quite friendly competition.

With Rodgers having a full collection of players to call on bar Wilfred Ndidi who’s out of the season, the game is still very much all square.

Leicester are also chasing their first European final and it will be a special feat to achieve it in one of the most historic grounds in football.