Zambian football legend, Kalusha Bwalya paid tribute to his teammates and victims of the 1993 air crash which killed an entire squad.

The air crash happened shortly after players of the team left the Libreville Airport in Gabon in a DHC-5 Buffalo transport aicracft owned by the Zambian Air Force.

The team were on a trip to Dakar for a 1994 World Cup Qualifying game against Senegal.

Every member of that promising Zambian squad died in the crash except three players including Kalusha Bwalya, then playing for PSV Eindhoven, Johnson Bwalya and Charles Musonda.

Kalusha Bwalya had led Zambia to an impressive outing at the Seoul 88 Olympics and was at the forefront of a third-place finish by the Chipolopolo at the Algiers’ 90 AFCON.

Expectations were high from Zambian locals about their rich squad in 1994 but that sad crash ensured they had to assemble a new team led by the Bwalya and others.

Zambia went as far as the final of the 1994 AFCON where they lost to the Super Eagles 2-1 after an Emmanuel Amuneke brace. 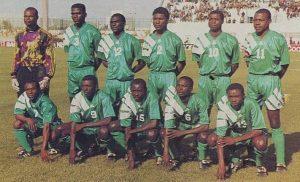 Remembering his teammates of old who died in the crash, Bwalya said;

“Today marks 29years since the tragic Air Disaster that killed 30 of my teammates and friends off the coast of Gabon.
May you continue to touch everyone at home & the world at large, who has ever played this game. You are loved beyond words and missed beyond measure, ” Bwalya tweeted.