by Kelvin Omachonu
in News, NewsNow
1

Super Eagles midfielder Kelechi Nwakali has revealed that Huesca maltreated and sacked him because he refused to sign another contract and went against the club’s directive to play for Nigeria at the Africa Cup of Nations.

Nwakali was the best player at the 2015 Under-17 World Cup, but he struggled to get into the reckoning, especially for the Super Eagles. The 23-year-old finally got his time under the sun at the last Africa Cup of Nations after a string of brilliant performances for Huesca earned him a place in coach Augustine Eguavoen’s squad.

However, it came at a cost, as since he returned from the African showpiece in Cameroon, he has not kicked a ball for Oscenses Azulgranas Los de. Nwakali returned late from the AFCON, ten days after Nigeria was eliminated.

Huesca did not take the matter lightly, as they revealed their intentions to either suspend him or terminate his contract. However, the Spanish players Union spoke up for the 23-year-old.

Nevertheless, they still went on with their decision, as they finally cut ties with Nwakali on Monday.

In an earlier report by Soccernet, it was revealed that Huesca was angered by Nwakali’s refusal to sign a contract that would see him move to Laliga 2 side, FC Burgos.

Nwakali has been silent on the issue, but the Super Eagles midfielder has come out to defend himself, corroborating Soccernet’s earlier report and also adding that Huesca never wanted him to go to the Nations Cup, and they wanted him to sign another contract under duress. 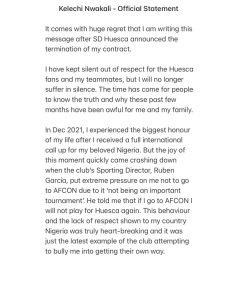 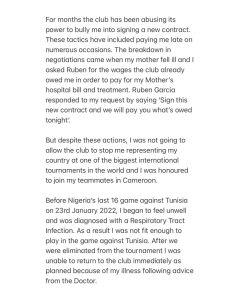 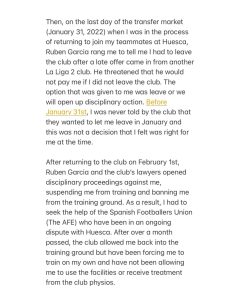 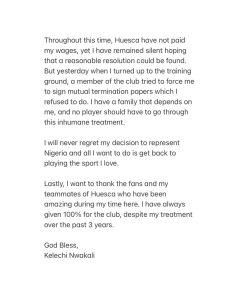