The Midfield Conundrum: What will Eguavoen do with Etebo and Iheanacho?

At the 2021 AFCON in Cameroon, the Super Eagles went into the tournament worried about the creative midfield spot in the team.

Alex Iwobi was at some point the creative outlet under Gernot Rohr but his dip in form at club level meant he struggled to pin a permanent spot down.

Austin Eguavoen worked with the double pivot of Wilfred Ndidi and Joe Aribo with the Leicester man providing a screen for the defence while his Rangers teammate took on the responsibility of ball carrying.

Their energy, game control and simplicity ensured that Kelechi Iheanacho playing in the hole just behind the front three had little to do in terms of defending. 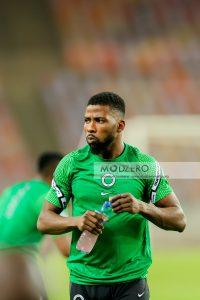 Iheanacho In The Hole

For a long period in the competition, Iheanacho struggled to bring that creative spark the team urgently needed with a bulk of the attacking forays coming from Moses Simon.

His attacking instinct and moments of brilliance however became what the team could count on. His goal against Egypt exemplified prime Iheanacho – smart, unpredictable and genius. But his ingenuity isn’t a regular showing.

He didn’t provide a moment of class again in the tournament until his beautiful assist to Umar Sadiq against Guinea Bissau.

The central creative burden placed on his shoulders were hardly carried gallantly as his failure to come to life against Tunisia could be blamed as one of the reasons the team struggled and eventually got eliminated.

When the Simon channel was locked out by the Tunisians, Nigeria’s next option was the midfield  and Iheanacho hardly stepped up. Eguavoen tried to salvage the day by bringing on Iwobi but  the rest is history.

Against the Ghanaians, Eguavoen faces another creative conundrum with Iheanacho showing what he could be in that role at Leicester. In Osimhen, he has a perfect strike partner in terms of strengths and style.

He’s proven to be a player many never see coming but has the moments in his kitty. If the ground will be soft enough for him to have those moments is another discussion entirely.

Oghenekaro Etebo was one of Rohr’s most-trusted lieutenants. From the 2018 World Cup qualifiers to the World Cup proper to the 2019 AFCON right until the Franco-German’s dismissal, he kept faith with the former Warri Wolves midfielder despite criticism from some quarters.

Etebo on his day promises a lot. His role under Rohr was more conservative than ever seen of him. His heroics at the Olympics are a reminder of what he could be capable of on the other end. His steel, ruggedness and energy however makes him a good option in the middle.

With Ndidi absent, Etebo’s experience could be massive for a game of this magnitude. Concerns about him have remained his fitness. Many were concerned to see his name on the list of invited players as he just resumed training some weeks ago. He’s however one player to expect a lot from when he’s on the pitch. Selecting him looks like a risk most coaches would like to take.  His energy is usually great addition and he can bring a lot of balance and composure to the team’s overall play.

Nigeria’s midfield options against Ghana are light especially in the creative areas and a player of Etebo’s quality and experience mag be very vital on the day.

A possible Onyeka-Etebo-Aribo combination will be interesting to see but its likelihood is very low. Etebo may also be saddled with the responsibility of playing as the screen for the defence but his readiness, more than his ability to play the role is skeptical.

Eguavibe has tough decisions to make and hopefully, whichever he does will help the team pick up the ticket to Qatar.