by Joba Ogunwale
in News, Nigeria
0

Victor Osimhen and Paul Onuachu lead a strong nominees list for the Nigeria Pitch Awards. The two players were nominated for Strikers of the year and King of the pitch.

Osimhen was also nominated for the Sam Okwaraji award- a prize given to Nigerian players and sports personalities for their positive contribution to society.

Organisers of the award revealed the nominees for this year ceremony at a press briefing in Lagos, with Osimhen and Onuachu receiving nominations in the two biggest categories.

Both players are currently injured and will miss the 2021 Africa Cup of Nations, but they had an excellent 2021 for both club and country.

Osimhen was Nigeria’s top scorer in 2021 with four goals, while he also scored 17 goals for Napoli in all competitions.

Meanwhile, Onuachu finished as the Belgian Jupiler League top scorer with a record-breaking 35 goals in the 2020/2021 campaign.

Other players nominated include Wilfred Ndidi, Maduka Okoye, Asisat Oshoala and many others.

Speaking at the press briefing, the president of the Nigeria Pitch Awards, Mr Shina Philips, revealed that the organisation will always continue to help develop sports in Nigeria.

“At our inaugural press conference in 2012, we stated that the Nigeria Pitch Awards platform would offer Nigerians more than awards to deserving footballers.”

“In continuing with this vision to offer more to improve sports in Nigeria, we are pleased to announce an annual symposium on sports.”

“The symposium, which will precede the annual Award Ceremony, will attract local and international speakers.” 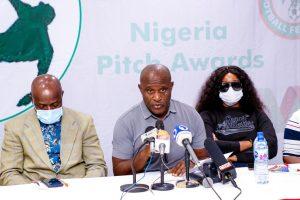 “Our vision is to make the gathering a unique opportunity to renew and re-focus national attention on sports in Nigeria and open up avenues for administrators to harness the opportunities sports provide.”

“We will outline more details of this project in the coming months.”

Goalkeeper of the Year

Defender of the Year

Midfielder of the Year

Striker of the Year

Team of the Year

Coach of the Year

Football Friendly Governor of the Year

Football Pitch of the Year Award

Queen of the Pitch

King of the Pitch