Despite the popularity of the English Premier League in this part of the world, quite a few Nigerians have appeared in the Spanish top flight to measured applause and admiration.

But their exploits have already been overshadowed by the likes of Villarreal’s Samuel Chukwueze, Granada’s Ramon Azeez, and Leganes’ Kenneth Omeruo.

None of those current Super Eagles stars made it here, though, as they are still active in Spain, and their story is not yet entirely written.

Soccernet Nigeria, however, presents seven excellent stars who have made an incredible impact in La Liga in the years gone by.

The 1994 African Player of the Year makes this elite list, not because he amassed more games in the Spanish top-flight than Granada’s Ramon Azeez or scored more La Liga goals than Rashidi Yekini but for being the only Nigerian to have won a major title in Spain.

After claiming the 1994 AFCON and an Olympics gold medal in 1996 with Nigeria, Amuneke was in the Barcelona team that lifted the Copa del Rey in 1997.

But injuries limited the impact of the former Sporting Lisbon at Camp Nou, with Amuneke managing only 19 appearances in the Primera Division across four seasons, scoring just once. 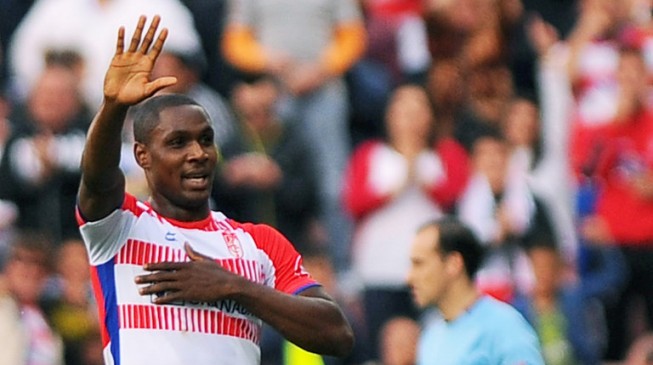 The former Nigerian international is often remembered for his time in England, where his exploits for Watford over a few years and presently for United has elevated his standing in the game.

But before moving to the Vicarage Road, Ighalo had a great spell at Granada, where the power-playing forward was groomed to be equally comfortable with the ball at his feet.

The 30-year-old already has his name forever etched into the history books of African football after finishing the 2019 AFCON as the highest goal-scorer with five goals.

But his 21 goals across two spells at Granada means he has to be also regarded as one of the country’s finest to ever feature in Spain.

The only keeper on this top list, Agbonavbare was, for many years, second-best to Peter Rufai at the national level, but no Nigerian goalkeeper has bettered the exploits of the former BCC Lions ace in Spain.

The late shot-stopper was for the best part of six years, the first-choice gloves-man at Rayo Vallecano, three of which was spent in La Liga.

Over 200 appearances for a top Spanish side speak volumes of the quality of a goalkeeper who was not considered good enough at major tournaments for Nigeria.

One of the most famous journeymen of Nigeria football, the elder of the Uche brothers featured for clubs in Switzerland, France, Turkey, Spain, Qatar, Turkey, and Poland winning three league titles at the latter with Wisła Kraków.

But it was his superb performances in Spain that brought him to the notice of the Nigerian national team handlers, who gave him the chance to represent the country at the 2010 African Cup of Nations and the FIFA World Cup in South Africa the same year.

Kalu Uche was never the outlandish midfielder, but it takes an elite player to garner nearly 150 caps for Almeria, Levante, and Espanyol in one of Europe’s finest leagues.

Adepoju was only 19 when he moved to Real Madrid Castilla and became one of Nigeria’s foremost legends in Spain after spending nearly one-and-a-half-decade playing for Racing Santander, Real Sociedad, and Salamanca.

The defensive midfielder may not have been as celebrated as the likes of Rashidi Yekini, Stephen Keshi, Samson Siasia, and Peter Rufai in the 90s for the Eagles. Still, he was an essential member of that AFCON-winning squad in Tunisia.

Having amassed more appearances than most in the Spanish top flight, Adepoju secures his place as one of Nigeria’s greatest in Spain.

Ikechukwu Uche has made it this far on the list, having played in more Primera Division matches and scored more La Liga goals than any Nigerian before or after him to date.

Uche’s pace, tenacity, trickery, and composure in front of goal made him a nightmare for many defences in his prime while starring for Recreativo Huelva, Getafe, Villarreal, and Granada among others.

A Pichichi Trophy winner for scoring 20 goals, Ike Uche helped Recreativo to emerge Segunda Division champions in 2006 dominating defenders in a way no Nigerian had ever done in Spain.

His 19 goals in 46 games in the colours of the Super Eagles assures him of a glorious place among the country’s most prolific forwards in history. Still, he will be more fondly remembered for representing his fatherland so beautifully in Spain.

Nigeria’s greatest ever player in La Liga history is none else than the Super Eagles’ most popular number seven.

Finidi was already an African champion, a UEFA Champions League winner, and a three-time Eredivisie champion before he switched Ajax for Real Betis in 1996, for a then-record fee for a Nigerian.

He quickly proved his worth at his new home, leading Betis to the Copa del Rey final the following year and scoring in the extra-time defeat to eventual winners Barcelona.

Two further spells at Mallorca followed his time at Betis, which were garnished by 41 goals in 183 games in all competitions before Finidi hanged his boots for good.

His legacy as the finest Nigerian in Spain is yet to be bettered.