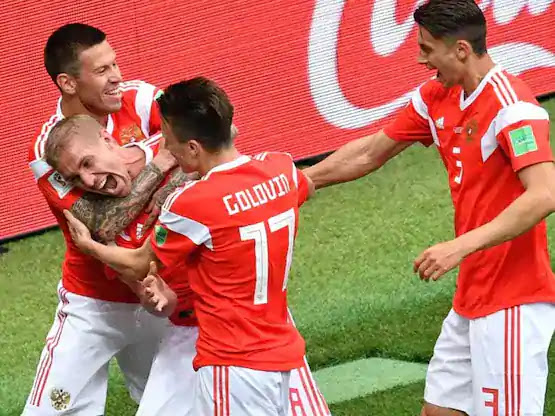 Russia is off to a perfect start as host nation of the 2018 FIFA World Cup.

Russia cruised to a 5-0 win over Saudi Arabia on Thursday in the opening match of the tournament at Moscow’s Luzhniki Stadium.

Yuri Gazinsky opened the scoring in the 12th minute, connecting on a header off a cross played into the box. Denis Cheryshev added a second goal for the hosts in the 43rd minute. Cheryshev was a first-half substitute, replacing Alan Dzagoev who left the game due to injury.

Artem Dzyuba entered the game as a substitute in the 70th minute, and within 89 seconds of stepping onto the pitch, he made it 3-0 for Russia when he headed home from close range.

Cheryshev scored a spectacular goal with the inside of his boot from just inside the penalty area in injury time. Aleksandr Golovin scored from a free kick moments later to complete the rout.