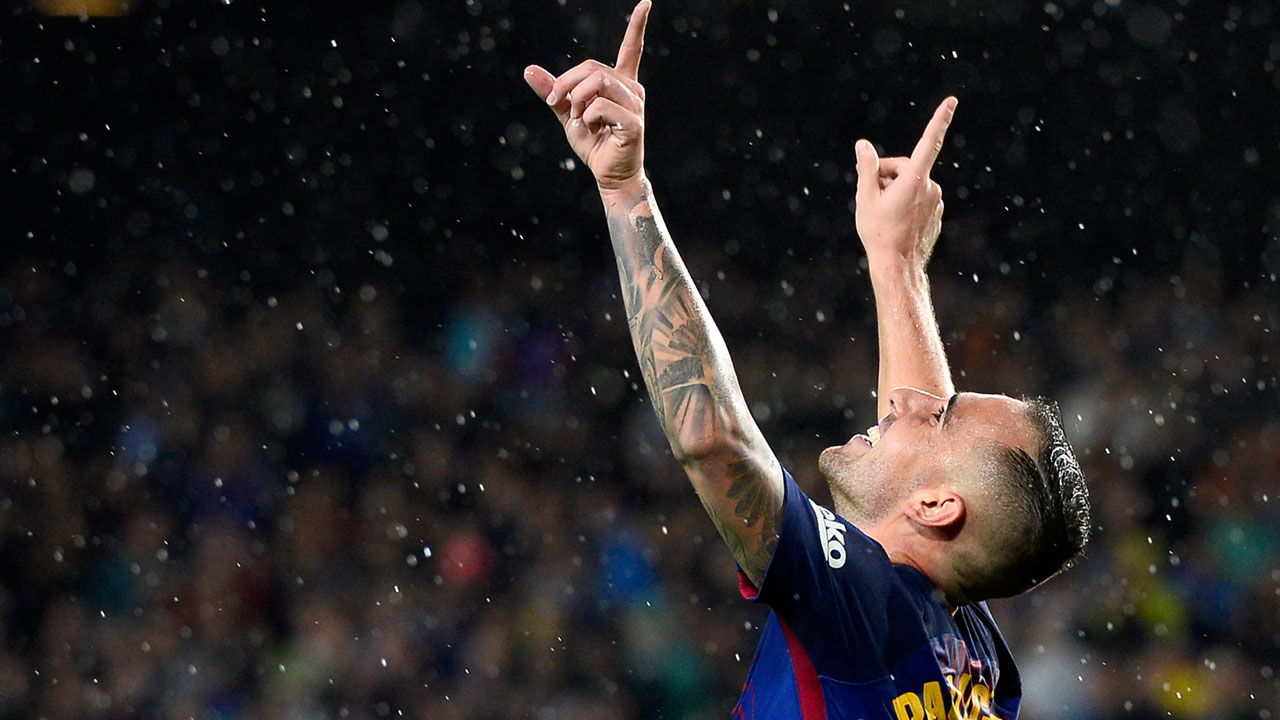 Barcelona continued their record-breaking start to a La Liga season by beating Sevilla 2-1 thanks to Paco Alcacer’s double on Saturday in an atmosphere at the Camp Nou marked by the political upheaval in Catalonia.

A huge Catalan flag and banners reading “justice” in Catalan and English were displayed before kick-off after eight ministers of the Catalan government deposed by Madrid were detained pending a possible trial for their roles in the drive for Catalan independence.

Two other banners reading “Freedom for political prisoners” and “Europe shame on you” were held up by the Barca singing section behind one of the goals.

Barca coach Ernesto Valverde last week joked such off-field distractions appeared to be helping his side and once again they weren’t fazed in registering a 10th win in their opening 11 La Liga matches.

The hosts could have scored three times in the opening 10 minutes as Clement Lenglet cleared off the line from Sergio Busquets, David Soria denied Luis Suarez and Ivan Rakitic fired a long-range effort inches wide.

Alcacer was the surprise choice in Valverde’s starting line-up and he opened the scoring on his first league start since the first day of the season.

Suarez’s cross-field pass was miscontrolled horribly by Sergio Escudero and fell perfectly for Alcacer to slot past the advancing Soria.

Barely a threat before half-time, Sevilla came out a different side after the break and levelled just before the hour mark when Guido Pizarro bulleted home Ever Banega’s corner.

Barca reacted immediately, though, and just six minutes later got the winner when Alcacer turned home Rakitic’s precise cross at the near post.

On his 600th Barca appearance, Lionel Messi had the chance to make the game safe when his low effort was saved by Soria, but Barca held on to move 11 points clear of Real Madrid, who face Las Palmas on Sunday (1945 GMT).

“No one will go undefeated through 38 games, but we are going to enjoy the moment,” said Valencia coach Marcelino Garcia Toral.

“In the dressing room there is no euphoria, there is realism and constant analysis.

“We know how difficult it will be to keep this up, it’s practically impossible.”

Dani Parejo’s clever free-kick that skidded underneath the Leganes wall got Valencia off to a perfect start on 14 minutes.

The hosts had to wait until 19 minutes from time to seal the points with a blistering counter-attack that ended with Spanish international Rodrigo heading home Manchester United loanee Andreas Pereira’s cross.

And the team spirit in this Valencia side was demonstrated when habitual penalty-taker Parejo let Santi Mina take responsibility from the spot eight minutes from time to round off the scoring.

“It was a phenomenal (gesture). They worked it out themselves and I prefer it like that,” added Marcelino.

“It goes to show the atmosphere there is within the group, which is the foundation for us to perform like this.”

By contrast, Atletico Madrid’s struggle for goals continues but Diego Simeone’s men were bailed out by Thomas Partey’s 91st-minute winner in a 1-0 victory at Deportivo la Coruna.

A 1-1 draw at home to Azerbaijani champions Qarabag all but ended Atletico’s Champions League campaign in midweek amidst a run of one win in eight games.

And they suffered from a familiar lack of creativity at Riazor with Simeone even substituting star frontman Antoine Griezmann 10 minutes from time.

However, a relieved Simeone punched the air in delight when Ghanaian midfielder Partey curled home Gabi’s layoff from a free-kick on the edge of the box to pass Griezmann and join Angel Correa as Atletico’s top scorer this season on four goals.