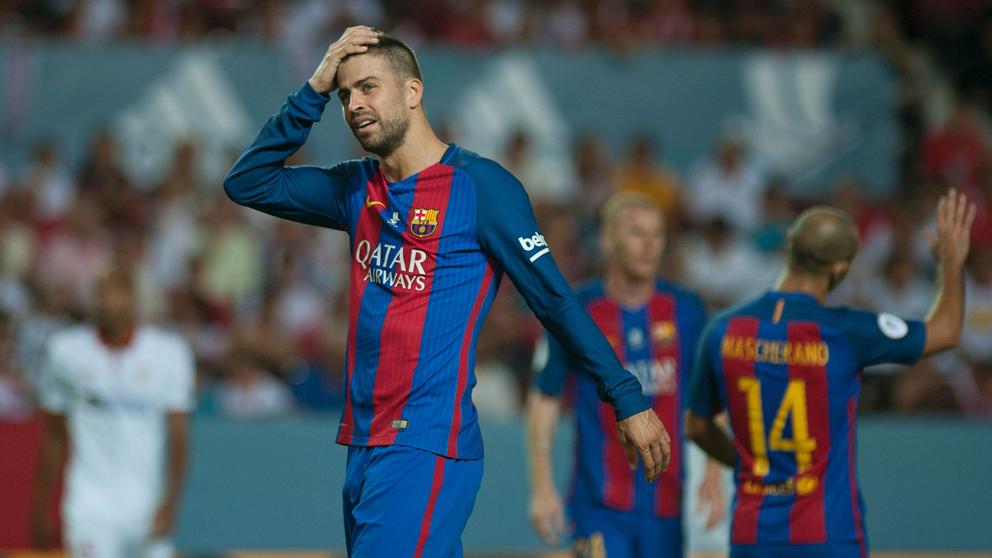 Barcelona star Gerard Pique’s tears of sadness and the vast empty stands as his team reluctantly played were two of the defining images of a violence-scarred independence referendum in Catalonia.

Pique, an outspoken defender of the wealthy northeastern region of Spain’s right to self-determination, had been able to cast his vote in an independence referendum deemed illegal by Madrid without obstruction on Sunday morning.

Others were not so lucky as police fired rubber bullets and forced their way into activist-held polling stations to confiscate ballots, in many cases by violently removing activists.

Clashes left at least 92 people confirmed injured out of a total of 844 who needed medical attention, according to Catalan authorities.

“I am very proud of Catalonia and all its people,” an emotional Pique told reporters as tears welled up in his eyes after a routine 3-0 win over Las Palmas in an empty Camp Nou on an otherwise extraordinary day.

Amid scenes of chaos and confusion outside Barca’s 99,000-capacity stadium, fans were left waiting for hours before a final decision to play behind closed doors was made less than half an hour before kick-off.

“If in the end you play this game, you do it with the public and all the consequences.”

Pique described the match, played in near-silence, as the “worst professional experience” of his career.

Barca had appealed to La Liga to postpone the game. However, when the football and security authorities refused to do so, the club feared a potential six-point penalty if they refused to fulfil the fixture.

Barcelona’s president Josep Maria Bartomeu claimed the decision to play behind closed doors was one of protest at events across Catalonia.

However, a section of Barca fan’s groups had threatened a peaceful pitch invasion to interrupt the match.

– ‘Shame’ and ‘Dignity’ –
The divided opinion over the decision was evident as two Barca board members reportedly resigned. An extraordinary Barca board meeting has been called for Monday afternoon.

Barcelona-based daily Sport’s front page read “Shame” above a picture of a desolate Camp Nou and “Dignity” in defence of Pique.

The reaction of Spanish Prime Minister Mariano Rajoy’s government to the escalating crisis has drawn widespread criticism both in Spain and across the world.

Pique said Rajoy was not up to the job of leading Spain.

“He travels around the world and doesn’t even know how to speak English,” he said.

Tennis world number one Rafael Nadal said his “heart sank” at seeing the images from Catalonia as he prepared for the China Open in Beijing. He also pointed the finger at bickering politicians.

“It is the time for both sides to use their heads. For that there has to be a willingness on both sides,” said Nadal.

“It is the moment to sit down, talk and reach points of agreement so that this is not repeated.”

Pique’s latest declarations have once again raised the debate over his role in the Spanish national team.

Despite forming a crucial part of the Spain sides that won the 2010 World Cup and Euro 2012, Pique is routinely jeered when representing his country.

He has already stated his intent to retire from international football after next year’s World Cup, but insisted he could step aside sooner if Spain coach Julien Lopetegui or the federation believe his political stance to be problematic.

“These players form part of Spanish football’s great success over the past few years,” added Guardiola, who coached all three at Barca.

“Spain is an incredible country. The sport, the culture… but there is a people that wants to express itself by voting.”