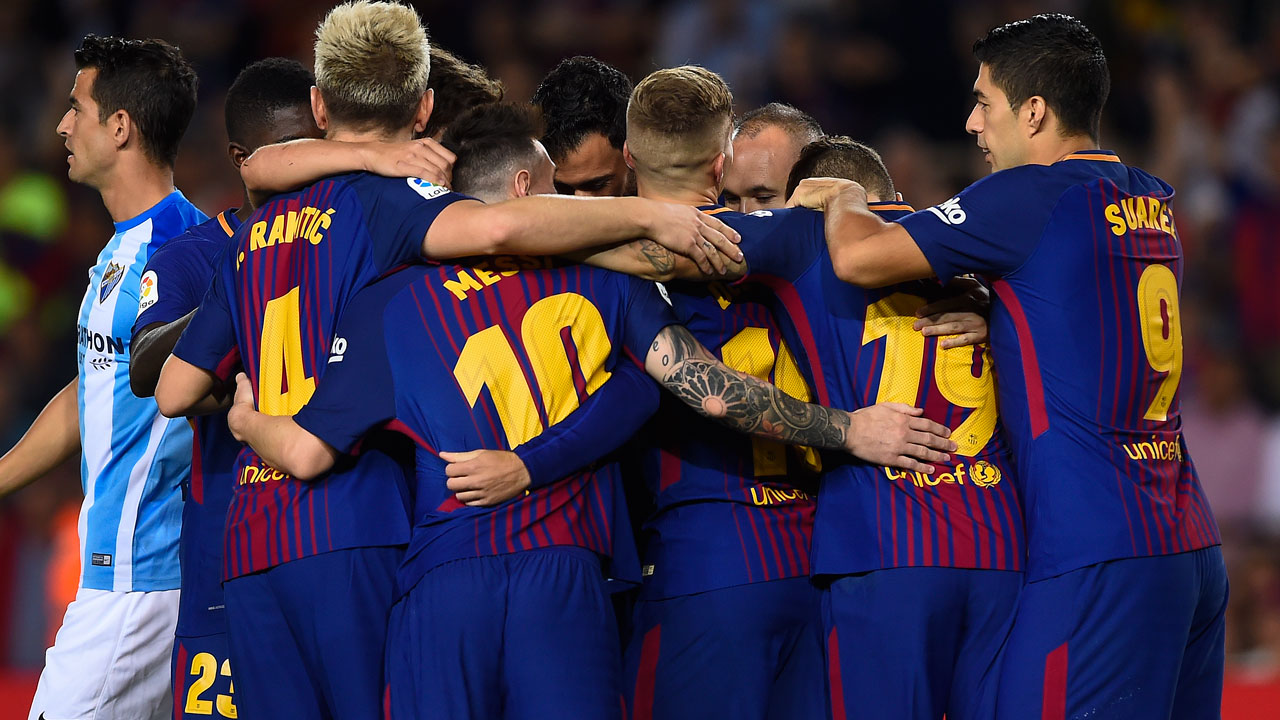 Barcelona dismissed another day of political chaos in Catalonia to continue on their merry way at the top of La Liga by beating Malaga 2-0 at the Camp Nou.

In protest 450,000 independence supporters piled onto the streets of Barcelona to voice their anger.

However, other than the usual cries in favour of independence in the 17th minute to mark the fall of Catalonia in the Spanish War of Succession in 1714 and sporadic chants of “freedom”, it was business as usual for Barca.

Earlier, club president Josep Maria Bartomeu insisted Barca will not be used as a political tool in the political battle over independence.

“We are not an instrument to be manipulated for political interests, whatever they may be,” Bartomeu told club members at Barca’s annual general meeting (AGM). “Nobody can appropriate our badge or flag.”

The club has backed Catalonia’s right to self-determination, but refused to position itself either in favour or against independence.

And despite being criticised by both sides of the independence debate for his neutral stance, Bartomeu went largely unchallenged at the AGM as members happily passed a budget backed by a club record revenue of 897 million euros ($1.06 billion) for the 2017/18 season.

That calm transferred onto the pitch as an 11th win in 12 La Liga and Champions League games this season leaves Barca four points clear of Valencia, and eight ahead of rivals Real Madrid, who host Eibar on Sunday.

Barca had failed to win four of their last six games against Malaga, but any threat the winless Andalusians could continue that run evaporated inside two minutes in fortuitous fashion for the hosts.


‘Grotesque’ decision
Gerard Deulofeu flicked home his first ever goal for the club with aplomb, but Malaga couldn’t believe the goal was allowed to stand despite the ball clearly having gone out of play before Lucas Digne crossed into the penalty area.

“It is grotesque. The ball was half a metre out,” complained Malaga defender Luis Hernandez

Barca, though, created precious little else before half-time and had to wait until 11 minutes into the second period to make the game safe when Lionel Messi teed up Andres Iniesta to fire into the top corner via the aid of a deflection.

“It was our third game in six days and we lacked a bit of freshness,” said Barca boss Ernesto Valverde.

“We had control but lacked a bit of penetration. I thought in the second-half we were better, played at a quicker tempo and quickly got the second goal.”

Luis Suarez should have rounded off the scoring, but somehow fired wide with the goal at his mercy after great work from Messi and Sergi Roberto.

An eighth defeat in nine games leaves Malaga still firmly rooted to the bottom of the table and coach Michel ever closer to the exit door.

Paris Saint-Germain loanee Goncalo Guedes continued his sensational form by opening and rounding off the scoring in fine style.

In between times Simone Zaza added his eighth Liga goal of the season before Santi Mina punished a slack Sevilla defence that has now conceded nine goals in five days after suffering a 5-1 rout at Spartak Moscow in the Champions League in midweek.