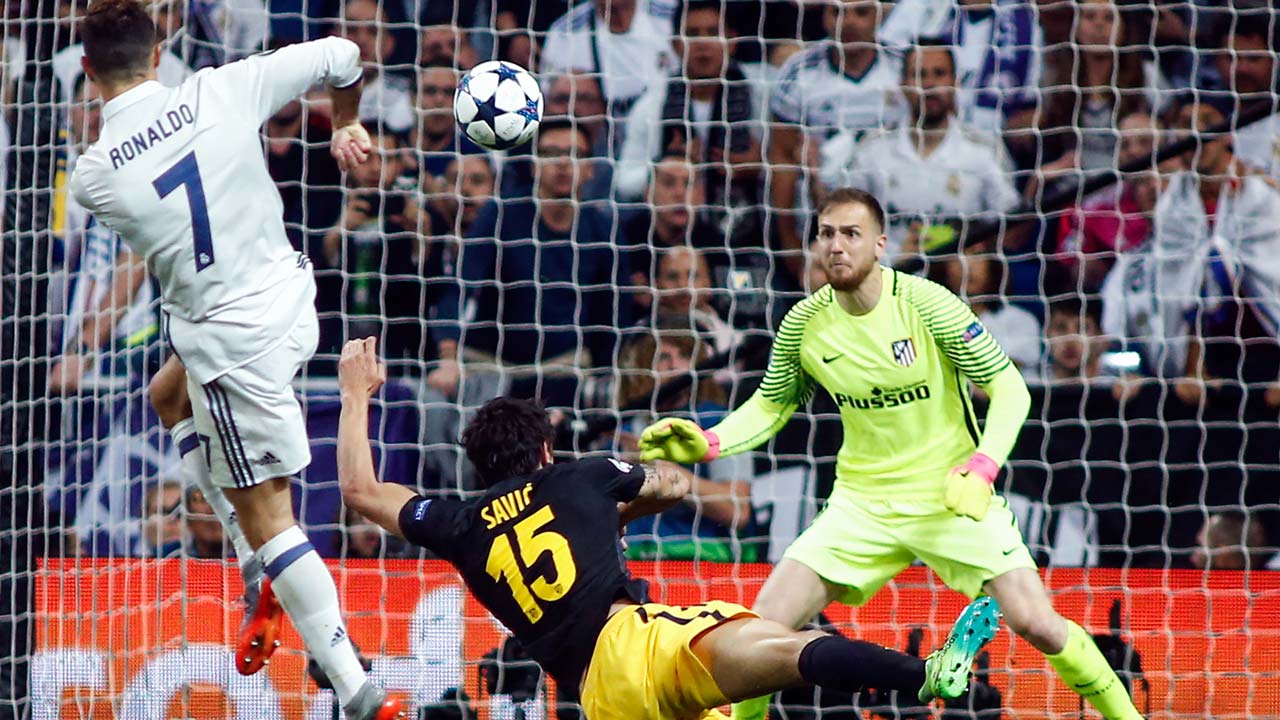 Ronaldo extended his lead as the all-time top scorer in Madrid derby matches by taking his tally to 21 and put Real firmly on course to defend their title in the final in Cardiff on June 3.

Ronaldo then smashed home from just inside the area and turned home Lucas Vazquez’s cross in the final 20 minutes as Real continued their domination of Atletico having eliminated them in the Champions League for the past three seasons.

Real needed a stoppage time equaliser en route to winning the 2014 final, scored a late winner in the quarter-finals a year later and edged last season’s final on a penalty shootout.

However, there was far more a gulf between the sides this time round.

The home fans made sure to put Atletico in their place before kick-off with chants of “kings of Europe” and a “how does it feel” banner alongside a display of their 11 European Cups.

Atletico were handed a lucky escape on seven minutes when Jan Oblak parried Dani Carvajal’s effort at the end of a careering run and the Slovenian recovered to also turn behind Karim Benzema’s follow-up effort.

There was no let off three minutes later, though, as Atletico failed to clear a corner and Casemiro’s bouncing cross looped up for Ronaldo to power home a header.

Oblak kept Atletico alive in the moments that followed with a brilliant save from Raphael Varane’s header and more comfortable stop from Isco.

However, at the other end, Keylor Navas rescued Real from conceding a vital away goal when he got a touch on the ball as Kevin Gameiro tried to round him when clean through on goal.

The majority of the efforts continued to rain down on Oblak’s goal as Luka Modric drilled a shot from the edge of the box inches wide.

And Benzema then acrobatically turned a Ronaldo cross just over the bar.

Atletico enjoyed a better spell just before half-time, but all they had to show for it was Diego Godin’s wayward volley after being picked out by Antoine Griezmann’s free-kick.

Real suffered an injury blow right on half-time when Dani Carvajal pulled up with a muscle problem that looks set to keep him out of the second leg.

Clear-cut chances were far harder to come by after half-time as Atletico toiled to create, whilst Real sat on their lead waiting for the chance to counter-attack.

However, once again in ties between these two, Real got the slice of luck to go with their extra quality.

The ball rebounded up perfectly off the heels of Filipe Luis for Ronaldo to blast high past Oblak.

And Ronaldo completed his second hat-trick against Atletico this season four minutes from time when Lucas Vazquez’s cutback picked out the four-time World Player of the Year to slot home from close range.

Transfers: Victor Osimhen, Samuel Chukwueze And The Nigeria Stars In The Eyes Of Europe’s Top Clubs