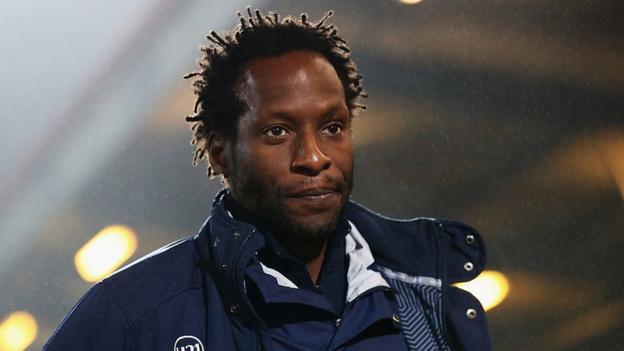 Former Premier League defender Ugo Ehiogu has died at the age of 44 after suffering a cardiac arrest on Thursday.

Ehiogu collapsed at Tottenham Hotspur’s training ground on Thursday and was rushed to hospital but Spurs released a statement on Friday morning confirming that their U-23 coach had died.

The former Aston Villa, Middlesbrough, West Brom, Leeds, Sheffield United and Glasgow Rangers defender won four caps for England during his career and won the League Cup twice with Villa and once with Boro.

Tributes have poured in for Ehiogu from across the soccer world after his tragic and sudden death. After joining Tottenham in 2014 as a youth team coach, Ehiogu played a big role in the development of plenty of Spurs’ young players who have now broken into the first team.

Aston Villa, where Ehiogu played from 1991 to 2000, will hold a minute’s applause before their derby against Birmingham City this weekend at Villa Park.

It is with immense sadness that we announce the passing of Ugo Ehiogu, our Under-23 coach. pic.twitter.com/sSU0yqVfyk

MFC are deeply saddened to learn of the tragic passing of our former player Ugo Ehiogu. Our thoughts go out to Ugo’s friends and family. pic.twitter.com/GDz8lqJJFF

We are deeply saddened to hear of the death of our former defender Ugo Ehiogu.

Our thoughts are with his family at this terribly sad time. pic.twitter.com/nTk1WBhr1H