How Super Eagles of Nigeria rated against Zambia. 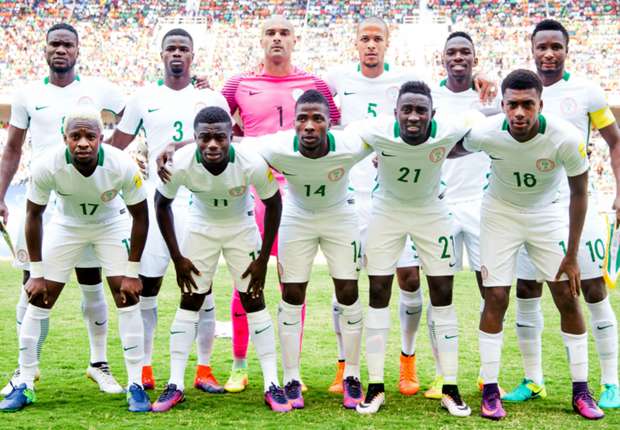 Super Eagles of Nigeria’s line up against Zambia in the 1-2 away win.

The Super Eagles of Nigeria started
their world cup qualifiers on a bright note as they clinched a 1-2 away win in
Ndola, Zambia on Sunday. Goals from youngsters Alex Iwobi and Kelechi Iheanacho
gave Nigeria a 2-0 lead before the break in the 32nd and 42nd
minute of the game as Nigeria overcame the host (Zambia) in front of their home
fans.
Following the 2-1 away win some Nigerian put
up a magnificent performance in the game to ensure that the game ended in the
favour of the Nigeria side as Gernot Rohr won his second game in charge of the
Super Eagles.
We highlights the
performance of these players accordance to their rate of performance in the
game.
GOALKEEPER

CARL
IKEME (6.5)
The
big man had a good game in goal saving a pin-point Zambia header and was alert
to block Kalaba’s effort in the second period. Could do nothing for the goal as
Omeruo committed a blunder.
DEFENDERS

WILFRED
NDIDI (5.0)
The midfielder playing out of position
struggled in the position for much of the game as (Rainford) Kalaba threatened
from his position. Was tidy in his interceptions at least to support the back
four.
KENNETH
OMERUO (5.0)
Kenneth was a shadow of himself as he
looked unconvincing in defence. Not the best of clearances and was at fault for
Collins Mbesuma’s goal as his lost possession when it mattered most.
WILLIAM
TROOST-EKONG 6.5
The best man in Nigeria defence just
as in the concluded Olympic games as he defended stoutly to make up for Omeruo
defensive inconsistency.
ELDERSON
ECHIEJILE 5.0
Not the best of defending for Elderson
on the left back as his touches was implicative and was not mobile enough in
attack. His crosses were not the best either.
MIDFIELDERS
OGENYI ONAZI (6.5)
The
ever present midfielder was energetic looking to plunge all the holes in Nigerian
midfield with his tireless display and some good forward passes.
JOHN
OBI MIKEL (6.0)
The Chelsea man utilized his
experience and was composed in possession with some incisive passes. Linked up
well with the dynamic duo of Iwobi and Iheanacho in transition and would have
added a goal in the game.
ALEX IWOBI (7.0)
The Arsenal man was very organized in
midfield putting the ball where there was spaces as he combined well in the
Kelechi going forward. Superb techniques to open his goal scoring account for
Nigeria.
ATTACKERS
KELECHI IHEANACHO (7.5)
The Manchester City forward was lively
all through the game as he combined well with Iwobi in the final third and
scored an individual goal to cap off a brilliant display. Great vision to pick
out Ideye in the second period.
BROWN IDEYE (5.5)
Missed
a glorious chance after been setup by Iwobi early in the game but occasional
linked up well Iwobi and Simon in Eagles’ attack.
SIMON MOSES (4.5)
Not the best of games from the forward
as he failed to inspire from the wings. The gent star did some good defensive
work for his team before leaving for Ahmed Musa later in the game.
SUBSTITUTES
ANDERSON ESITI (6.0)
The
midfielder added width to Eagles midfield, made some good movement alongside
Mikel and Onazi and a delivery into the box though was cleared by the Zambian
defence.
ABDULLAHI SHEHU (5.0)
The defensive midfielder came on to
replace Onazi and did some nice tidy at the base of the midfield to ensure that
the Eagles see out the victory.
AHMED MUSA (5.0)
A late cameo but tasked the Zambian
keeper with a low drive for a corner kick. Turn from his marker brilliantly in
the quest to add speed to the weary Super Eagles’ attack.