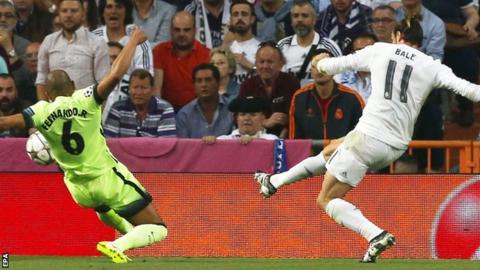 Zinedine Zidane’s Real Madrid have the chance to get their 11th Champions League title after they qualified for the final of the tournament courtesy of a 1-0 win against Manchester City at the Santiago Bernabeu.Coming into the game with a first leg advantage due to the 0-0 draw at the Etihad, Real Madrid knew that a win in any form would guarantee them a place in their second final in three seasons and they did absolutely just that, winning the tie with a 1-0 aggregate score against a Man City team which looked satisfied with losing.Manchester City were without Midfielder David Silva for the game and salt was added to their injury during the game after star defender and Captain Vincent Kompany was forced off early on with an injury. Missing their defensive leader, Man City didn’t have much time to reorganise their defence before Real Madrid opened the scoring thanks to good work from Gareth Bale. The Welshman got the ball in the right wing and unleashed a shot which deflected off Fernando to beat Joe Hart, although Bale celebrated, the goal was recorded as a Fernando own goal.Fernando’s midfield partner Fernandinho came closest to score next after he did well to create space on the left and all he needed was to place his shot on target but unfortunately fired wide. City needed a goal to qualify but didn’t look like they were going to get it and would have to thank Goalkeeper Joe Hart that the game remained at 1-0 after he did well to stop strikes from Cristiano Ronaldo and Luka Modric. Gareth Bale came close to finishing the tie before the final whistle after his header hit the woodwork.Man City were too respectful and didn’t put more pressure on Real Madrid defence but Aguero came very close to getting the equalizer late on with a superb drive from outside the box that beat Keylor Navas but wasn’t on target as it went off the roof of the net. The goal was enough to see Madrid in the final as they seek their 11th title in Milan.