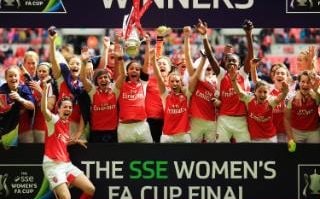 The Nigerian striker was on for the entire duration, as the game ended in favour of the North London club, making history after leaving the Liverpool Ladies. Daniela Carter made the difference for Arsenal Ladies 18 minutes into the game. The winger cuts inside, skips past her marker and bends the ball into the top corner.

Kelly Smith hits the bar in the 48th minute, as Oshoala delivered a good cross, but the striker rattles the woodwork. Nigeria-born English striker, Eniola Aluko replaced Carney in the 55th minute, as Chelsea made their second change.