Dele Alli: I can never play for Arsenal 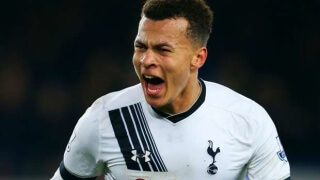 Tottenham starlet, Dele Alli, insists he would rather give up football altogether than play for Arsenal.

The Spurs midfielder has been one of the players of the campaign so far for Mauricio Pochettino’s side.
After an impressive breakthrough season, the England international has now held down his spot at White Hart Lane as they continue to push Leicester City in the race for the Premier League title.

Alli’s performances on the field for Spurs – which include eight goals and nine assists – have earned him a nomination for the PFA Young Player of the Year and could see him included in Roy Hodgson’s Euro 2016 squad for this summer’s finals in France.

The 20-year-old midfield ace appeared on YouTube Channel Copa 90 this week ahead of Tottenham’s tricky trip to Stoke on Monday night.

And after being asked whether he would ever consider turning out for North London rivals, Arsenal, Alli gave a response which will win over the Hearts of every Spurs fan.