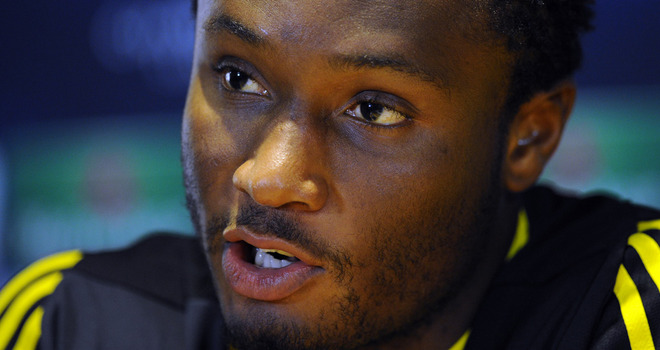 Others in the six-man list pencilled down are goalkeeper Courtois, Oscar junior, Radamel Falcao, Loic Remy and Baba Rahman. Not much was divulged about why the six players are being asked to go, especially Mikel, Coutiois, Oscar who are regular players in the team till date.

It appears Mikel’s refusal to sign a fresh contract until heis assured of a regular first team shirt may have contributed to his been listed in Chelsea’s clear-out document for next year, knowing that he has one year left to his previous deal with lapses in 2017. Mikel will then walk away as a free agent, one thing Chelsea management won’t want to happen. The Blues‘ bosses would be looking to be paid some millions of dollars for the Nigerian’s next move.
Interestingly, Guus Hiddink admits Chelsea are trying to overcome a feeling of emptiness as they limp towards the Premier League finish line.

It has been a disastrous campaign for the Blues as Jose Mourinho oversaw the club’s worst ever start to a season under Roman Abramovich’s rule. They were never in the title race, dumped out of the Champions League by Paris Saint-Germain and knocked out of the FA Cup by Everton.

Not even the Capital One Cup would provide silverware this term as Stoke City ended their interest in that competition in October.

Hiddink took over following Mourinho’s sacking in December and was unable to challenge for the top four despite going unbeaten until last week’s loss at Swansea City.