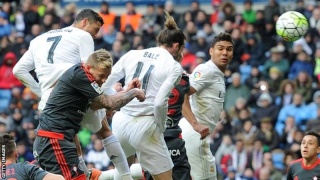 Pepe opened the scoring five minutes before half-time with a bullet header from a corner. Real took flight in the second half when Ronaldo got off the mark with a trademark shot from outside the box that dipped over Sergio Blanco who was well off his line.

The Portugal forward made it three with a superb free-kick eight minutes later, whipping in a hard shot that dipped over the wall and beat Blanco for sheer speed.

The visitors pulled one back just past the hour when Iago Aspas beat Ramos and Pepe to a long clearance out of the Celta defence and lobbed Keylor Navas in the Madrid goal. But Real kept Celta pegged back in defence and Ronaldo completed his hat-trick inside 14 minutes from a pass by Isco after a good combination with Lucas Vázquez.

His fourth goal was a header from a cross by Jesé, who scored the team’s sixth a minute later after a dribble through the defence and a shot that went in at the base of the post. Bale put the icing on the cake with a thunderbolt from outside the penalty area on the left that went in off the far post.

The Real coach, Zinedine Zidane, said of Ronaldo and the way he made the ball dip for three of his goals: “Cristiano is unique with his shot, only he has it. I could hit the ball well but from closer in. I don’t know the feeling, few players have it.”

The win puts Real one point behind Atlético Madrid before they visit Valencia on Sunday and seven clear of Villarreal, who are at home to Las Palmas.