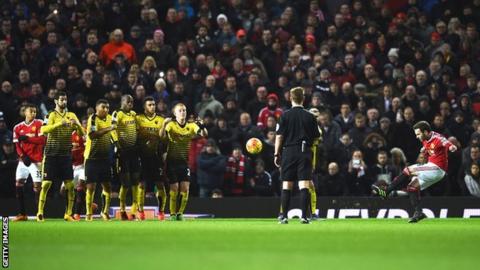 It is another midweek action all around Europe with catching games in various subdivisions across with Europe with top class football in display.It was mouthwatering as various club side were in action in various matches in order to secure a reputable positions in various league tables and also with cup games on going.We take a look at how it was in the mid-week with Nigerians players abroad in focus. Most of Nigeria imports were involved in the tip of the action.SoccerNet Nigeria highlights these Nigerian players abroad who were in action for their respective clubs in midweek. IN ENGLAND
Alex Iwobi was not listed in Arsenal’s match day squad as they went down 1-2 to visiting Swansea City.
Stoke city forward Osaze Odemwimgie was not listed in Stoke City match day squad as they defeated Newcastle United 1-0 courtesy of Xherdan Shaqiri 80th minute strike.
At Upton Park, Emmanuel Emenike lasted 73rd minute for West Ham United and was replaced by Andy Carroll while Victor Moses was not listed for West Ham United as they defeated Tottenham Hotspur 1-0 at home.
Liverpool dealt with Man-City with a whopping 3 – 0 score line as Jordan Ibe replaced James Milner in the 88th minute while City’s Kelechi Iheanacho came on for Brazilian midfield player Fernandinho in the 55th minute of the game.
Odion Ighalo was in action against Manchester United but was replaced in the 75th minute by Moroccan Nordin Amrabat as United defeat Watford 1-0.IN SPAIN
Malaga new signing Ikechukwu he was not listed in match day squad as they lost 1-2 visiting Sevilla at home. IN GERMANY
Anthony Ujah made a cameo appearance in the 84th minute replacing hat-trick hero Claudio Pizarrio as Werder Bremen defeated highflying Bayer Leverkusen 1 – 4 at home.
Leon Balogun lasted the distance in the heart of the defence as they (Mainz 05) overcome Bayern Munich 1-2 at the Allianz Arena.IN PORTUGAL (CUP)
FC Porto Central defender (19) Chidozie Awaziem was out target for his FC Porto side in the 11th minute as they defeated Gil Vincente 2-0 on the night. Awaziem lasted the distance while Gil Vincente forward Simmy Nwankwo was not listed in Gil Vincente match day squad.IN SCOTLAND
Efe Ambrose was on the bench for the entire duration of the game as Celtic were held goalless (0-0) by visiting Dundee FC.
David Amoo lasted 66 minute of the game for Partick Thistle and was replaced by Christie Elliot as St. Johnstone FC lost 1-2 at home to visiting Partick Thistle.
Dundee united forward Edward Ofere made a late cameo appearance in the 86th minute as he replaced Billy McKay in Dundee United 0-1 lost to visiting side Aberdeen. IN AUSTRIA
Hot forward Olarenwaju Kayode was on target for Austria Wien in the 55th minute scoring the second goal of the match as Austria Wien claimed a vital 3-0 away win over Admira Moedling.IN CYPRUS
Former Youth International Ganiu Ogungbe was not listed in Ethnikos Achnas match day squad as they mere held for a 2-2 draw by visiting side Nea Salamis FC.   IN RUSSIA
Amkar midfield player Fegor Ogude lasts the entire 90 minutes while team mate Chuma Anene, new Signing Bright Dike and Anglo. Nigerian defender Brian Idowu mere all rooted on the bench as their side Amkar defeated visiting Dinamo Moscow 3-1.IN BULGARIA
Levski Sofia new signing Tunde Adeniji came on for Jeremy De Nooijer in the 71st minute of the game as Levski Sofia mere held to a goalless draw (0-0) by visiting side FC Montana.[post_ad]