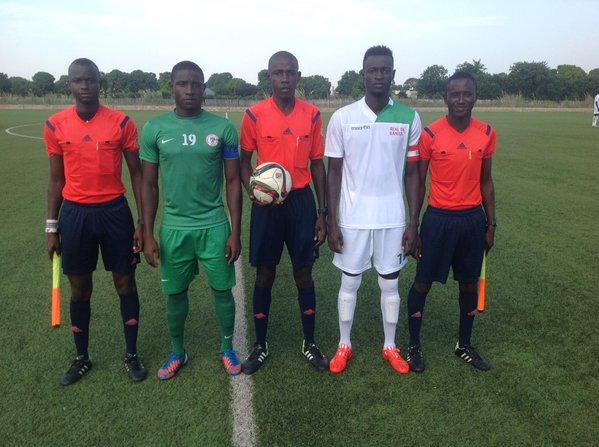 The U-23 National Team, Dream Team, on Saturday morning defeated Gambian top team, Real De Banjul 3-0 in its first friendly game at a pre-Africa U-23 Cup of Nations camp in The Gambia.

The encounter which was played at the FIFA Goal Project, Banjul and watched by a handful of spectators including the President of the Gambian Football Federation, Lamin Kaba Bajo, Secretary General of the Gambian FF, Abass Bah, the President of Real de Banjul, William Abraham and Tunde Adelakun, special assistant to the NFF President on international affairs, saw Coach Samson Siasia fielding a strong team including the likes of Emmanuel Daniel, Oduduwa Segun, Captain Sincere Seth, Oghenekaro Etebo, Stanley Dimgba, Kufre Ebong and Tonbara Tiongoli.

The Nigeria U-23 immediately took control of the game piling pressure on the Gambian vice champions, with wingers Stanley Dimgba and Tonbara Tiongoli tormenting the defense line of their opponents at will, and in one of such early moves Etebo fluffed a clear chance to put the Dream Team ahead after collecting a pass from Dimgba.

The pressure continued and in the 25th minute, Oghenekaro Etebo put the Nigeria U-23 ahead from the penalty spot after captain Seth was fouled in the eighteen yard box by an opposing defender.

The first half ended 1-0 in favour of the Nigeria U-23. It was a charged Dreat Team that returned in the second half, playing so well to the admiration of all present and in one of such moves, Etebo connected a fine pass from Seth to make it 2-0. Barely three minutes later, Etebo was on target again for his ha-trick, after collecting a pass from Stanley Dimgba and firing the ball beyond the reach of the opposing goalkeeper.

The Nigeria U-23 thereafter dominated the game even with the introduction of Victor Osihmen, Bature Yaro, Prince Aggrey, amongst others.

Reacting after the game, Coach Samson Siasia expressed disappointment with the way the team played in the first half despite dominating the game, adding that they should not be missing chances to score goals after creating them.

“I’m not impressed with what my boys displayed, I expected them to let their dominance count in front of goal and if they can’t convert these chances then we will be in trouble in Senegal. We will keep on working on them and hopefully they will get it right.”

Meanwhile, the Nigeria U-23 will reston Sundayto returnon Mondayto play its second friendly game against the Gambian U-20 National Team. The encounter billed to kick off by4pmwill be played at the Independence Stadium, Banjul.