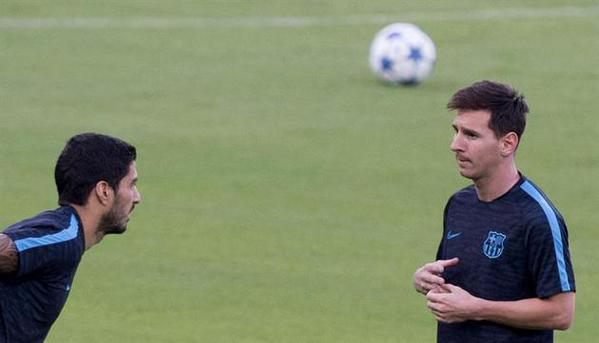 FC Barcelona began the defence of their UEFA Champions League crown with a 1-1 draw against Italian side AS Roma at the Stadio Olimpico. It was not a night to remember for the Catalans as they didn’t get the result they wanted, but it was a game that meant a lot to three key Barcelona players, Lionel Messi, Luis Suarez and Jordi Alba.

The game against AS Roma was Lionel Messi’s 100th game in the UEFA Champions League. The Barcelona talisman made his debut in 2004 against Shakhtar Donetsk and has since grown to become the youngest footballer to reach 100 games in the history of the UEFA Champions League, a feat which the Argentine achieved at just 28 years, 94 days old. He also became only the 26th player in the tournament’s history to reach a century of games.
In these 100 games, Messi has won a total of 53 of them losing just 14 times and playing in 14 draws whilst scoring 77 goals and registering 22 assists in the process, helping Barcelona to win the prestigious trophy four times. In the 10 seasons he spent, he won the top scorer award on 5 of those, a magnificent record.

Luis Suarez joined Barcelona in the summer of 2014 and has really enjoyed his stay in the Catalan capital so far. He waited until October to make his debut and featured in his 50th game for the Catalans in all competitions. During these fifty games, the Uruguay star netted 28 times and provided 20 assists.
He helped Barça win 40 games during this period losing just 6 times with 4 draws whilst winning 4 trophies. Barcelona never lost whenever he scored and his goal against Roma made him the Uruguayan with the most goal in European competitions, tying with compatriot Edinson Cavani with 30.

Jordi Alba joined Barcelona in 2012 and has since made 118 appearances for the Catalan club. The game against Roma was the player’s 300th career game as a professional footballer with the other games coming for Nastic, Valencia and the Spanish National team where he played 36, 110 and 56 games respectively.