EPL: How Nigerians Fared Across England 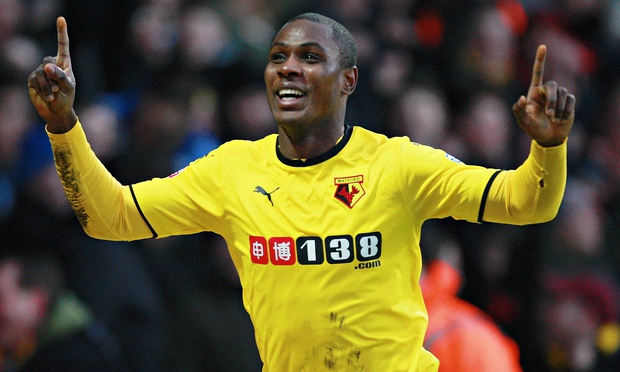 Nigeria international Odion Ighalo was the star of the show as Watford notched their second Premier League win of the season, beating Newcastle United 2 – 1 at St James Park.

The attacker netted a first – half brace to take his tally this season to four goals from six matches. Alongside Scotland national – teamer Ikechi Anya, he went the distance for The Hornets.

At the Britannia Stadium, national team colleague Peter Odemwingie came off the bench in the 82nd minute as Stoke City shared the spoils (2 – 2) with this season’s surprise package Leicester City.

Everton were held to a goalless draw by Swansea City away from home. Three Lions midfielder Ross Barkley was substituted in the second minute of injury time. He has started all the games in the Premier League this term.

Victor Anichebe was left out of West Brom’s squad for the visit to Gabriel Agbonlahor’s Aston Villa. The out – of – favour England international played all 90 minutes in his team’s 1 – 0 loss to The Baggies.

In the early kickoff, John Obi Mikel was a late, late sub as Chelsea swept aside Arsenal 2 – 0 in controversial circumstances.
[post_ad]
For the latest football news, follow us on Twitter and like our Facebook page.