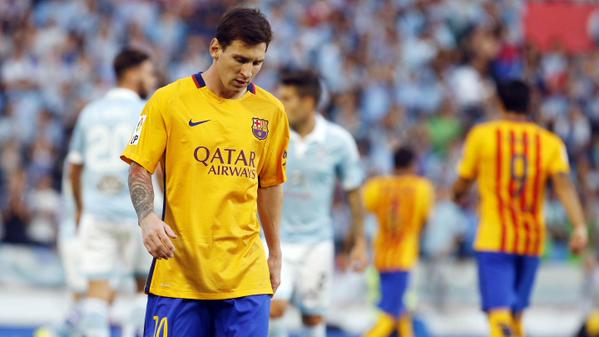 It was a nightmare at the Balaidos as FC Barcelona were humbled by Celta Vigo 4-1 to halt the Blaugranes’ 100% record in La Liga.

The Galician outfit got a two-goal lead from the first half as Barça target Nolito scored a magnificent chip before Iago Aspas doubled the home sides lead against a Barça who were having one of their worst performances in their recent history.

Iago Aspas netted his second and Celta’s third in the second half and a rejuvenated Barça – who could have scored a lot earlier – got one goal back through Neymar with 10 minutes of normal time left to play before substitute Guidetti ruined the Azulgranas hopes of pulling a comeback to make it 4-1 for the hosts as they go top of the League table.

The hosted started the game on a brighter note and got the opening goal on the 26th minute through former Barça player Nolito, who was a nightmare for the defence throughout the game. A cross from Hugo Mallo reached the player at the left wing and the Barça target chipped the ball over Ter Stegen to give Celta a deserved lead.

It was two for the hosts four minutes later as Iago Aspas made the most of a mistook pass from Gerard Pique to chip Ter Stegen once again in a one-on-one situation and leave Barcelona reeling.

The game was 2-0 at half-time and Celta Vigo almost made it three shortly after the interval through the inspired Aspas. Busquets lost the ball to Wass in midfield who played Aspas through, but the striker could only fire wide of goal.

Barcelona were much more better than they were in the first half and Messi almost got a goal but his shot bounced off the post after good work from Neymar and Iniesta. Gerard Pique also missed a header in the area as Barça sought for a goal.

Barcelona committed more players forward as they searched for a goal and were made to pay in the 56th minute when Aspas was left unmarked in Barcelona’s half. The player had all the time and space in the world to place the ball to the bottom left corner, giving Ter Stegen no chance. 3-0 for the visitors.

Barcelona didn’t relent though as they continued to believe. They created lots of chances which were wasted by Neymar and Munir with Celta’s goalie in great form keeping out Messi on more than one occasion.

However, Barcelona would get a goal in the 80th minute through Neymar. The Brazilian was on hand to latch on a beautiful trademark pass from Messi before firing low into the back of the net but the goal was quickly cancelled out through Gudetti after poor defending from Barça’s back-line. 4-1 it ended, Barça’s biggest Liga loss since 2008 and they lose top spot to their opponents.