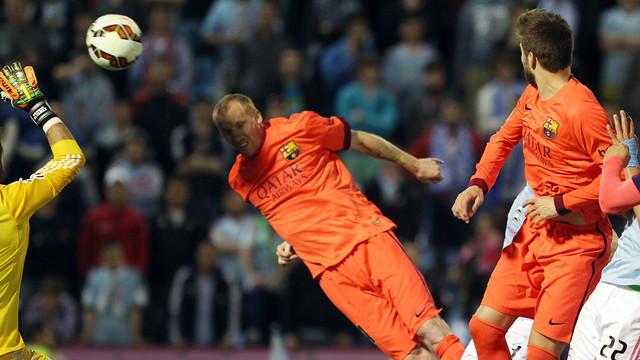 Just 72 hours after their 4-1 win against Levante, Barcelona will make a difficult away trip to the Balaidos to take on the in-form Celta Vigo side in their fifth Liga game of the season.

Last season’s game against Celta away was very significant as it was one of the pillars of Barça’s Liga win. After a 1-0 loss against the Galicians at the Camp Nou in the 9th game of the season, Barcelona were to be hosted by their opponents this time in a very important game after they’d beaten Real Madrid the previous week.

The game was going as Barça expected it, tough, tense, rough, breathtaking.. Barcelona thought for a minute that they’d drop points here as the game was destined for a draw only for Jeremy Mathieu to score a diving header in the 79th minute to give Barça a sweet, invaluable 1-0 win. This ensured Barça went on to win the title.

This season’s fixture will be as last season’s and Barça will surely be expecting a fight. Celta Vigo are in the form of their lives as they’ve scooped 10 points from a possible twelve which lies them on equal points with Real Madrid and Villarreal.

Luis Enrique’s former team beat Europa League champions Sevilla away from home in their last game 2-1, thanks to goals from Barça target Nolito and Hugo Mallo, the former of whom is in great form with four goals.

Barcelona were presented with difficult away fixtures and they’ve overcame threats in Bilbao’s San Mames and Atleti’s Vicente Calderon, now they travel to Bailados before making another gruesome trip to the Sanchez Pizjuan to take on Sevilla.

If they manage to get all three points against Celta, they will be in good course to retain their title as it will be a confidence boost. Luis Enrique rested a couple of player for the game and the Blaugranes are expected to take the game by storm on Wednesday evening.