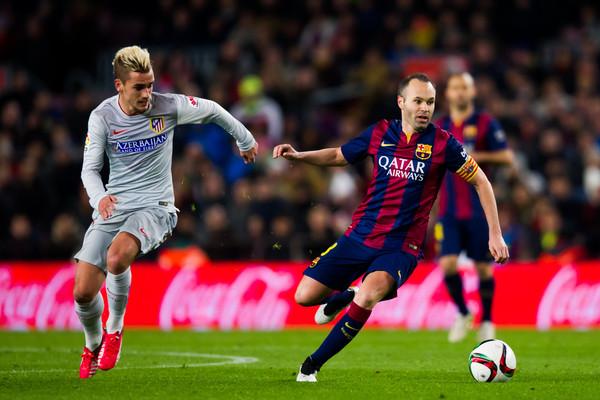 Champions FC Barcelona face their first major test of the new Liga season as they take on Atletico Madrid in third game of the season in a bid to maintain their winning streak so far in the campaign.

The Catalans are not in their usual flowing form, getting tiny 1-0 wins in their first two games of the season against Athletic Bilbao and Malaga respectively. They go head-to-head with Diego Simeone’s men who are also seeking to maintain their 100 percent record, coming at the back of a 1-0 win in their opening fixture against Las Palmas and a fine 3-0 win over Europa League winners Sevilla away from home.

Diego Simeone is yet to beat Barcelona in La Liga since he became coach of the Colchoneros, last season was a typical nightmare against the Catalans as he lost in all four meetings against Luis Enrique’s team.

This fixture last season has a huge significance to Barcelona. A Lionel Messi goal ensured Barcelona win their 23rd Liga title after a 1-0 win over Diego Simeone’s men at the Vicente Calderon. The win was Barça’s fourth against the Madrid team in one season.

However, Barça will certainly face a different and much stronger Atletico team today as they have added some great acquisitions which includes strikers Jackson Martinez and Luciano Vietto alongside left-back prodigal son Felipe Luis. The Colchoneros have won their last five games without conceding a goal and will surely make the Azulgrana’s work hard. They have no injury concerns and are in great form, this is the best time to face Barça.

Luis Enrique’s Barça come into the game knowing they will be presented with a game, the Coach has named his 18-man Squad for the tie which features Adriano Correia and Sergi Roberto, however, he will have to do without goalkeeper Claudio Bravo, defenders Dani Alves and Douglas Pereira through injuries and also, Gerard Pique who is still serving a four-match ban.

FlyBarca Prediction: Atletico Madrid will be the more careful side and will rely on counter attacks to break their opponents. They have the advantage but with the Messi-Suarez-Neymar trio present, Simeone will be very cautious when sending players forward. Barcelona will win.
Atletico Madrid 1-3 Barcelona.