Totti: Messi Is An Incomparable Champion 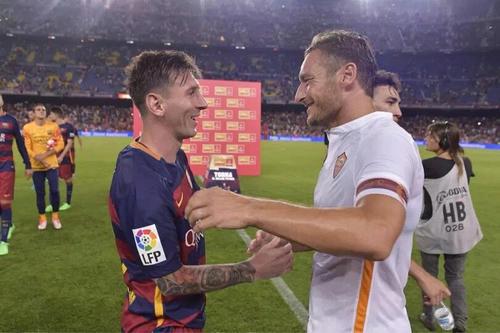 AS Roma forward Francesco Totti has heaped praises on Lionel Messi and FC Barcelona after his team came head-to-head against the Catalans in the Joan Gamper Trophy.

Goals from Neymar Jr, Lionel Messi and Ivan Rakitic gave Barça a comprehensive 3-0 win over AS Roma but despite the loss, Totti praised the Barça Number 10 who scored his team’s second of the night.

In a statement on Totti’s official site, the player was positive and also enthused that it is an honour to play against Barça.

“On Wednesday night we were given the honour of playing against Barça at the Camp Nou,” the statement reads.

“Aside from the result, playing against teams of this exceptional level allows you to grow, and to store up some valuable experience.

“It was a pleasure to find Luis Enrique (his former coach) again and to measure ourselves against the many Blaugrana champions.”

On Messi:
“It’s only fair to make a special mention for Lionel Messi, who proved yet again that he is not only an incomparable champion, but also a model of kindness.”

The Gamper win was Barcelona’s final pre-season game as they prepare to kick-start their season officially with the Uefa Super Cup game around the corner.