Ter Stegen Beats Neuer, Buffon To UEFA Save Of The Season 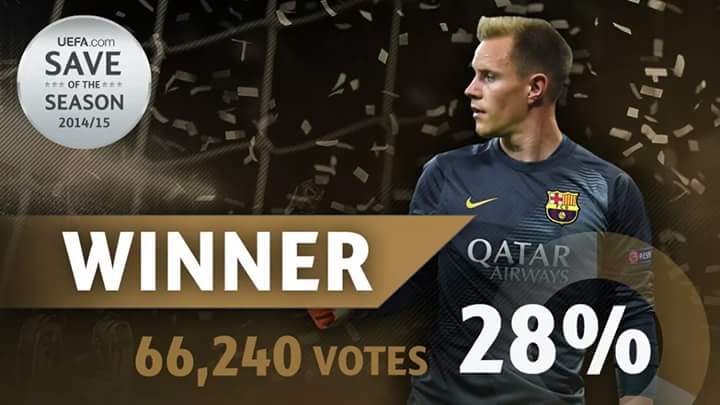 Barcelona young goalkeeper Marc Andre Ter Stegen has been announced as the winner of the 2014/2015 UEFA Best Save of the Season as his magnificent double saves against Bayern Munich in last season’s Uefa Champions League beat competition from Manuel Neuer’s, Gianluigi Buffon’s and Thibaut Courtois’ heroics.

Barcelona had already won the first leg 3-0 courtesy a brace from Messi and a late Neymar strike but went into the second leg at the Allianz Arena knowing what Guardiola’s Bayern are capable of doing. The game ended 3-2 in favour of the Bavarians but the highlight of the game was a Ter Stegen sublime save that kept out Robert Lewandowski goal-bound shot just off the goal line. That save from that moment was already a candidate for the save of the season award and no disappointment as it has scooped the accolade with 28% of possible votes.

Aside from Ter Stegen’s beauty, one will not complain if any of the other 9 nominations got the award as they are all saves that will shock the heart.

Bayern Munich’s goalkeeper Manuel Neuer was in second spot behind Ter Stegen. His double save against AS Roma in the group stage got 20% of the votes. Although Neuer had little to do in that game as Bayern were strolling, he was called to action on 85th minute when he pulled off a stunning save to deny Gervinho a goal before following it up with another beauty to keep out Nainggolan’s goal-bound rebound. Had this won the award, no one will have any valid reason to question the voters.

Gianluigi Buffon may be ageing but his goalkeeping talent is still in his gloves. His jaw-dropping save to keep out Dani Alves in the UCL final also picked up 20% of votes. While Barça were leading 1-0, Dani Alves curling first time shot seems a goal already before the strong left-hand of Buffon kept it out. The most astonishing part of that save was that Buffon had already gone the wrong way during the flight of the ball. A great save.

Thibaut Courtois was fourth on the list with 11% of votes. His effort to deny Thiago Silva an extra-time equaliser in Chelsea’s Round of 16 clash against PSG was a great stunner. The Blues were leading 3-2 deep in extra-time of their second leg clash when Thiago Silve pulled a strong header on goal only for Courtois to stretch to the ground and keep it out for a corner. However, Chelsea ended up crashing out after conceding.

To complete the top 5, Manchester City played Barcelona in the round of 16 and were no match for the Catalans. In the second leg, City lost 1-0 but if it wasn’t for Joe Hart’s best career performance, they might have conceded up to double digits. The England goalkeeper frustrated the Barça attack pulling off 11 saves on that day and kept out Messi, Neymar and Suarez on numerous occasions. His 7% of votes was rather a surprise.

Sevilla’s Sergio Rico came 6th on the list with 6% of votes following his great save to keep out Konoplyanka shot in the Europa League final to keep the tie against Dnipro to keep the game at 2-2. Sevilla later got a winner and were crowned Europa League Champion for the second consecutive season.

It wasn’t only Rico that fascinated the crowd with a great save that night, Dnipro’s Denys Boyko also pulled a stunning save to deny Carlos Bacca a hat-trick. The save came 7th on the list with 5% of votes.

Kasper Schmeichel, son of the legendary Peter Schmeichel was 8th with 2% following his great performance for Denmark in their 2-0 win over Serbia to edge them closer to a UEFA Euro qualification.

Denmark Under-21 goalie Jakob Busk was 9th with 0.5% courtesy of his performance vs Germany Under-21 while Shakhtar Donetsk youth goalkeeper Olech Kudryk was 10th with his saves in the semi-final against Anderlecht.