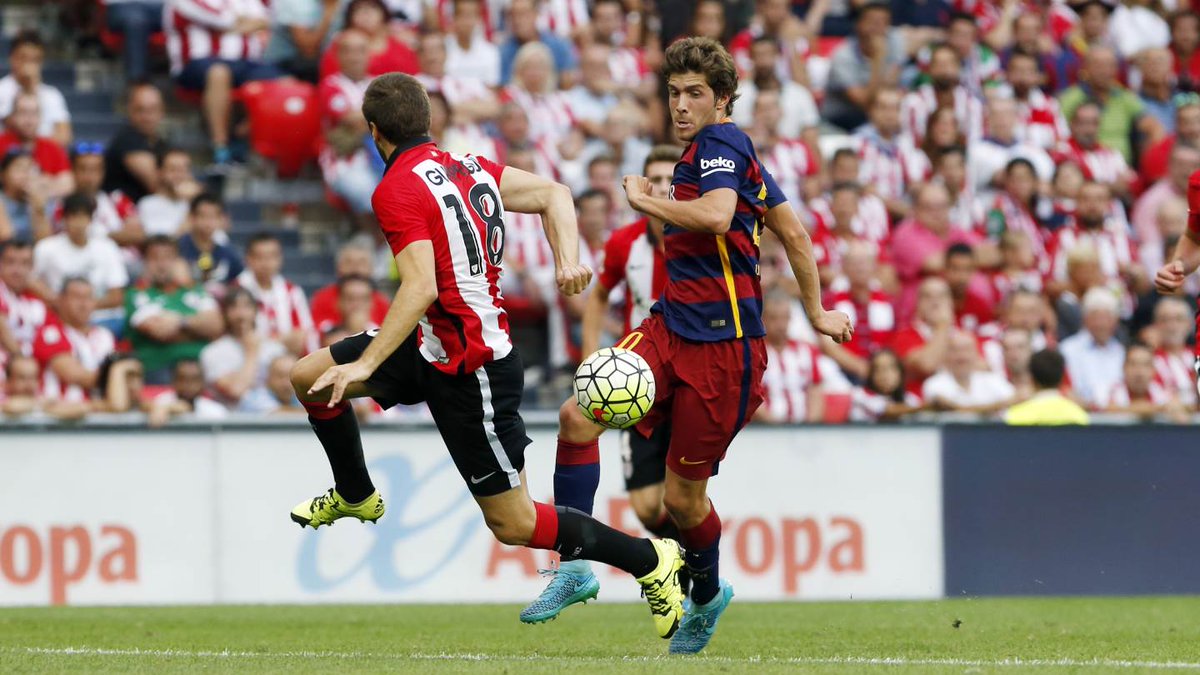 Barcelona got their 2015-2016 La Liga campaign off a winning start after they registered a hard-fought 1-0 win over Athletic Bilbao at the San Mames on Sunday.

Lionel Messi missed a penalty in that game but Luis Suarez covered his blemishes with a 54th minute volley that ensured Barça got the valuable three points. However, a major talking point in that game was the outstanding performances from youngster Sergi Roberto and rejuvenated defender Thomas Vermaelen.

Vermaelen was given the nod to start as Barcelona were missing Jeremy Mathieu and Gerard Pique through suspension while Sergi Roberto replaced an injured Dani Alves on the 19th minute. At the end of the game, it was crystal clear that the duo were the best Barcelona players on the pitch.

Luis Enrique experimented with Sergi Roberto at right-back during pre-season as he saw some qualities of a ‘back-winger’ in the youngster. Sergi is naturally a Central Midfielder and has played there all his life but sometimes featured as a holding defensive midfielder.

When Sergi Roberto was introduced, many thought he would lag in the right-back position but the star put up an excellent performance which saw him scoop the official Man of the Match award. In the 80 minutes he spent on the pitch, he was totally 100%. He got everything right and didn’t make one mistake. His passes were perfect, crosses were pin-point and one thing that made him stand out was his marking, he quickly gains the ball back after losing it.

Roberto played his best game on a Barcelona shirt on Sunday. His pace and dribbling skills didn’t show up whenever he plays in midfield but all his characteristics were forked out in his new position. He almost set up Suarez for the opener and nearly got a goal himself after his rocket shot struck the top of the crossbar. He had a perfect game.

Thomas Vermaelen joined Barcelona from Arsenal last summer but had a sour season that was filled with injury. He featured only once for the Catalans last season, playing an hour in the Blaugrana’s 2-2 draw against Deportivo on the final day of La Liga.

The player had a surgery early this year and is fully fit to play, his last game proving this point valid. The Belgian was the solid man in the Barça defence against Bilbao. His tackles were well timed and he didn’t show any form of injury worries or fear. His passes were absolutely accurate and Barca-like and he teed up well on the left with Jordi Alba whilst also maintaining a perfect understanding with Javier Mascherano and goalkeeper Claudio Bravo.

According to the game’s post-match statistics, Vermaelen was the player on the pitch that got the most clearance (16), interceptions (4), touches (106) and aerial duels won (4). The defender perfectly dealt with everything thrown at him and also matched aritz Aduriz in the air, which is a plus.

Luis Enrique will be the happiest man on earth as both players’ inexplicable form came just at the right time. Dani Alves is expected to be out for four weeks and with Douglas Pereira also injured and Aleix Vidal ineligible, Sergi Roberto is the only choice at right-back and with the performance at San Mames, Lucho won’t even think twice before giving the youngster the starting berth.

Jeremy Mathieu is back for Barça this weekend against Malaga meaning Luis Enrique will have to choose between him, Bartra and Vermaelen to partner alongside Javier Mascherano in defence but the Belgian’s great show up against San Mames might just earn him a starter position for the remaining three Liga games Gerard Pique will be out for.

The prayer in the lips of Barça fans is that the form of Vermaelen and Sergi Roberto against San Mames is not an accident and they hope to see more of such beautiful performance for a long time. Both players will be in action fr the Catalans in their next league game against Malaga at the Camp Nou on Saturday evening.