The Catalans continued their winning form after overcoming Malaga to secure a 1-0 victory, thanks to a 73rd minute strike from Thomas Vermaelen 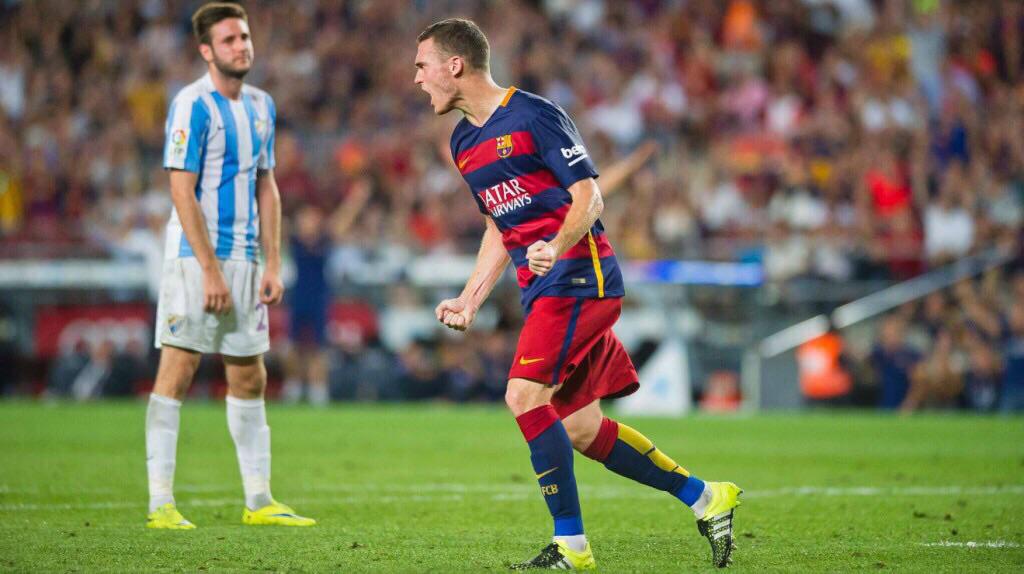 Barcelona got their second win in La Liga in as many games as they beat Malaga 1-0 at the Camp Nou on Sunday.

Defender Thomas Vermaelen got the only goal of the game that saw the Catalans see off a defensive Malaga side whom they failed to beat over two legs in La Liga last season.

The whole Barcelona put up great performances but found it difficult to score as Malaga’s goalkeeper Carlos Kameni was in a very good form but could do nothing to keep out Vermaelen’s left-footed half volley from inside the area.

Claudio Bravo – 6.0
Had nothing to do as often. Was nearly caught off the mark by a Juanka lob from 50 yards after he was seen loitering outside his 18-yard box. Started Barça attack from the back well as he kept his 8th consecutive Liga clean sheet.

Sergi Roberto – 6.5
Replaced the injured Dani Alves at right back and didn’t perform badly at all. Did everything right but wasn’t as effective as he was in Barça’s previous game against Athletic Bilbao last week.

Javier Mascherano – 7.0
The defender nearly got his first ever Barça goal after he had a header strike off the crossbar. Made a couple of last ditch tackles including a crucial one to stop a break from Malaga’s Cop. Was solid throughout the game.

Thomas Vermaelen – 8.5
Vermaelen is having his best period as a Barça player. Was 100% solid at the back clearing every danger thrown at Barça’s defence. Came close to scoring earlier on and was rewarded for his efforts in the 73rd minute as he scored Barça’s only goal of the night with a half volley from just inside the box. Was clearly Barça’s best player on the pitch and he may end up securing a starting spot in Luis Enrique’s team.

Jordi Alba – 7.0
Showed why Barcelona lacked efficiency during his absence as they look a lot better now with him in the team. His runs and control of play was superb. Was just lacking on the final cross, something he has to work on.

Sergio Busquets – 6.5
His movement was good as usual and he controlled the midfield very well but didn’t show up well. Tested Carlos Kameni with a shot. Not a bad game for the midfielder.

Ivan Rakitic – 5.5
Rakitic’s last two performances have been worrying, he offered very little in Barça’s attack and just couldn’t click with his team-mates. Luis Enrique saw his ineffectiveness and replaced him with Rafinha in the second half. Not a good game for the Croat.

Andres Iniesta – 7.0
The Barcelona captain still has his sparks on. Made two brilliant runs that almost helped Barcelona make the breakthrough. Made some good final passes but poor finishing from the forwards didn’t just make things happen. Don Andres is still far from being finished.

Lionel Messi – 7.0
Was in a personal duel with Carlos Kameni as the goalkeeper kept him out on four different occasions in the last 45 minutes. Made some beautifully executed diagonal passes that were often wasted. Was double-marked throughout the game but the newly-crowned UEFA Best Player in Europe could have done better.

Luis Suarez – 6.5
Was too eager to score and that was a problem. Got the ball in the back of the net in the 4th minute but was adjudged to have fouled Angeleri, who was marking him. Should have gotten a penalty after being fouled inside the area by Angeleri. Not a bad performance from the Uruguayan.

Neymar – 7.0
Returned to the starting line-up after missing the last two weeks of action through Mumps and he had a great performance. Tested Kameni with a weak shot in the first half and could have gotten a penalty in the second after his ball was handled by a Malaga defender in the box. Was handed a standing ovation by the fans as he was substituted in the 86th minute.

Rafinha Alcantara – 7.0
The youngster was brought on to replace Ivan Rakitic in the second half and lived up to expectation. He caused a lot more danger to the Malaga defence with his runs and skills. Was great!

Sandro Ramirez – N/A
Replaced Neymar to play the final five minutes of the game and didn’t have anything to do.

Jeremy Mathieu – N/A
Replaced Thomas Vermaelen in the second half and wasn’t called upon as the game ended.