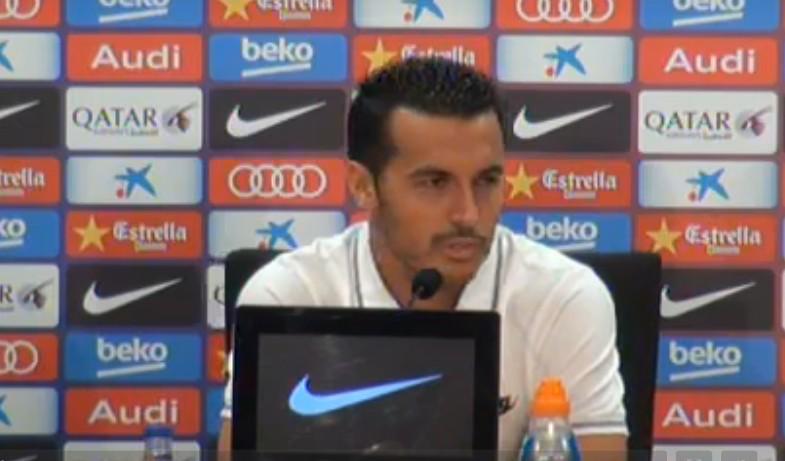 Former Barcelona winger Pedro Rodriguez joined Chelsea FC for €30 million last week after signing a four-year deal. However, Barcelona staged a press conference for the player to say his final goodbye to the club! An event which all first team players as well as Luis Enrique attended.

“Right now, I’m a bit nervous. I didn’t prepare anything to say, I’ll just say what springs to mind. Playing at Barça was a dream come true.”

“I want to thank everyone here, especially my former teammates. I tried to learn from Andres [Iniesta], Xavi, [Victor] Valdes, Puyi (Puyol), Busi (Busquets) and the best in the world (referring to Messi)…”

“I’m sad to leave my home, but happy that I’ve been able to enjoy so much here during my stay.”

“I knew it will be very difficult to have much playing time here but I’m ambitious. I’m really happy to have this new challenge.”

“I renewed my contract in June with the idea of staying at Barça, but I also knew it included the possibility of leaving.”

“Barça is the best club in the world, there’s no other place like here, but I’ve joined a club I like very much and where I will have more playing time.”

“Initially, it felt odd to wear the Chelsea shirt, because I had never imagined myself leaving Barça.”

“Last season was one of my worst, because there was a lot of competition and I didn’t have enough playing time.”

“The welcome I got at Chelsea was great, I felt comfortable from the beginning. John [Terry] is really a great captain.”

“Several English clubs were interested in my signature. [Manchester] United, [Manchester] City… But in the end Chelsea acted the quickest and wrapped up the deal soonest.”

“I spoke with Mourinho, it’s true he called me and I liked what he said. He convinced me to join.”

“I’ve always liked the possibility of living in London with my Family, and the fact that I have friends at Chelsea.”

“I don’t think this team will miss me. There’s a lot of quality in this squad. I will miss the team though, both on and off the pitch.”

“I prefer not to return to the Camp Nou wearing another shirt. It would be a strange occasion. But if that’s what fate holds…”

“Of course I want to be at the Euro next year – who wouldn’t? – but that wasn’t my main reason to leave. I just wanted to play more.”

Pedro was applauded by the whole team in the conference room and was greeted with hugs and kisses. We can deduce that he loved Barça, but left because he wanted to play more. Gracies Pedro!