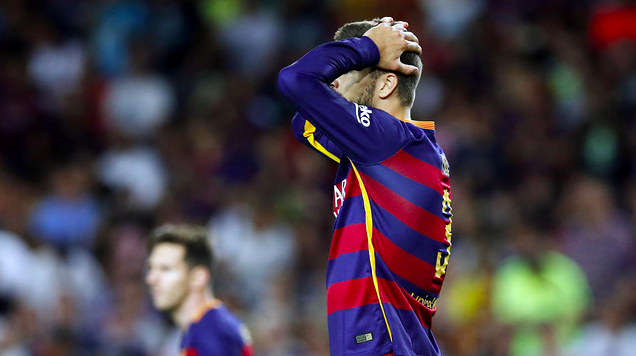 Barcelona defender Gerard Pique will miss the Catalans’ next four games in La Liga after being suspended for allegedly assaulting the linesman in Barcelona’s 1-1 Spanish Super Cup draw against Athletic Bilbao on Monday.

After an attempt from Bilbao’s Aritz Aduriz, Pique confronted the linesman for failing to flag the player offside and was shown a straight red card by the referee Vellasco Carballo for his use of vulgar languages.

The referee’s post-match report stated the defender used extreme foul languages in addressing the linesman, although Barcelona and Pique both refute the claim.

Barcelona announced yesterday that they will appeal the sanction and Pique himself took to his official twitter page to apologise to the world but claimed he didn’t insult the official, contrary to what the referee reported.

The four-game ban means Pique will miss games against Athletic Bilbao, Malaga, Athletico Madrid and Celta Vigo in La Liga. It is no doubt a huge blow for Barça as they have been struggling in defence of late.