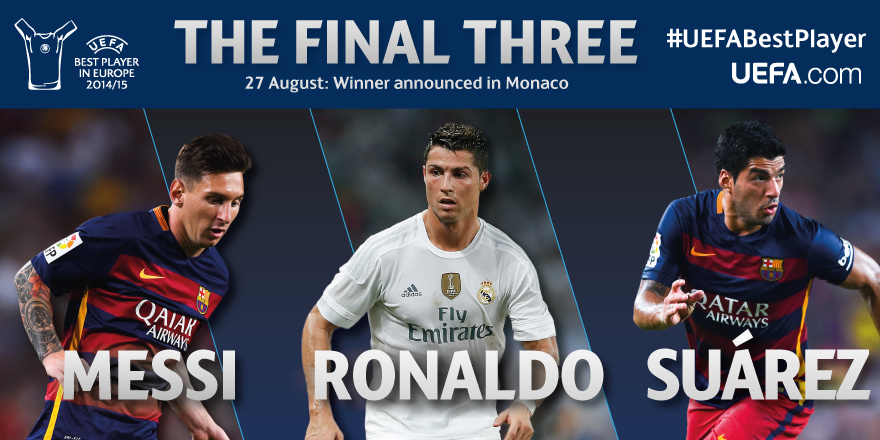 Two of the Barcelona deadly attacking trident, Lionel Messi and Luis Suarez have been nominated for the Uefa Best Player in Europe award for the 2014/2015 season with the final nominee being Real Madrid talisman Cristiano Ronaldo.

Barça’s duo of Messi and Suarez formed alongside Neymar, a ruthless attacking trio that notched up an astonishing 122 goals across all competitions but the Brazilian, who was joint top scorer in last season,s Uefa Champions League campaign wasn’t among the final three nominees as he ended up in 5th spot.

Journalists from all 54 member association of Uefa took part in the voting exercise for the Best Player in Europe prize. Each Journalist provides their five best-ranked players who they believe should win the award, with each of those players receiving a points tally based on the ranking and number of votes they receive. The first on each list receives 5 points, the 2nd four, 3rd three and so on.

Barcelona’s Lionel Messi is favourite to land the award for a record 2nd time but will surely face a strong competition from Ronaldo and Suarez.

The winner of the award will be announced at the Uefa Champions League group-stage draw on August 27.