Luis Enrique: Neymar And Busquets Could Play Against Malaga 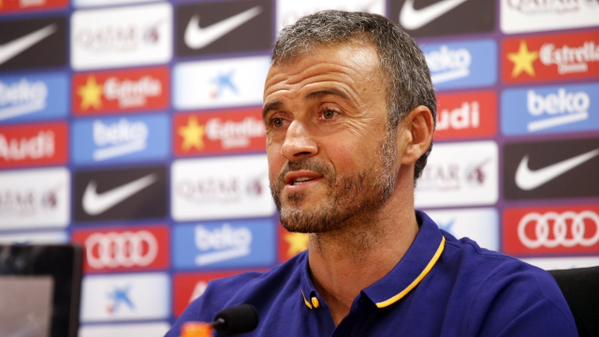 Barcelona head coach Luis Enrique had a press conference ahead of the Catalans’ first home game in the new La Liga season and the Asturian spoke on so many issues including the possibility of Barça making another transfer move.

The Barça manager spoke on his team’s UEFA Champions League group. The Blaugranes were placed in group E alongside Bayer 04 Leverkusen, AS Roma and BATE Borisov and the coach insisted it is a tough group for Barcelona but is looking ahead to overcoming the ‘exciting’ task.

“Like every other team, we got a tough draw in the Champions League, but it will be very exciting,” he said.

Luis Enrique also spoke on the availability of Neymar who has been out for two weeks with Mumps and Sergio Busquets who sustained a knock in Barça’s last game for the Malaga game and he stated that both players are doing fine and may feature.

“Neymar has done very well in the past few days, he has been training normally but we’ll make a decision tomorrow if he’ll play.”
“Sergio [Busquets] also looks good, we will decide tomorrow,” he continued.

The coach also expressed his delight to have Sergi Roberto in his squad, a player whom the coach has converted into a right-back recently.

Sergi Roberto naturally is a midfielder, but he’s a very perfect utility player. It’s great for a coach to have such a player.”

Prior to the game against Malaga tomorrow, Luis Enrique believes the match will be a tough encounter. Malaga were the only team that didn’t concede a goal against Barcelona over two legs in La Liga last season and Luis Enrique hopes his players are able to turn things around this time.

“Tomorrow’s game will be a very tough one. Let’s just watch if we are capable of overcoming any difficulties.”

The coach went on to state Barcelona’s aim in this season’s UEFA Champions League campaign, saying they will try their best to become the first team to successfully defend the title.

“Our Champions League group is not going to be easy, but we’re the champions and we’ll go out there to try and defend the title.”

AS Roma, Luis Enrique’s former team were drawn in the same group as Barça and the coach is relishing a happy and exciting return to the Stadio Olimpico.

“I’m really excited to return to Roma. I’m looking forward to going back to a wonderful city and seeing the great people there.”

On the comparison made between Barça’s talisman Lionel Messi and Athletics Champion Usain Bolt, Luis Enrique insisted that comparing both Athletes is perfect as they are both the greatest ever in their respective sports.

“Usain Bolt is the greatest sprinter of all time and Leo Messi is the best footballer of all time, it’s fair to compare both of them.”

Lucho is also aware of the threat Malaga pose ahead of the fixture and also acknowledges their good defensive qualities. Barça failed to score a single goal against them in two Liga meetings last season, drawing 0-0 away and losing 0-1 at the Camp Nou, however, Luis Enrique hopes the story is different tomorrow.

“Málaga’s defensive strategy was very effective last season. It (the defeat) hurt us, but tomorrow I hope everything turns out to be different.”
“I know Málaga will look for different ways to make things difficult for us. I only hope that we come out better.”

Speaking on Luis Suarez importance to the Barça team, Luis Enrique admitted the former Liverpool man had a tough start to life at the club but is now a key player in the Squad in all aspects.

“[Luis] Suarez went through a very tough period before signing for us but right now, he is a very important player for us. For us, Suárez is key not just for his goal-scoring, but also, the work he does affects the way the game is played.”

On the possibility of Barça making another signing, Luis Enrique didn’t rule out a new addition but also didn’t mention any names, stating the club are not in an urgent need of any player.

“Barça are always open to improving the squad. We continue to evaluate the squad, but there is no urgency [to sign any more players].”
“The best way to continue motivating the team is knowing that the only important thing is to keep on working hard.”

And finally, he made it clear that Neymar is in good shape and could return to action in the game against Malaga after missing the last two weeks through Mumps.

“Neymar didn’t train for the past two weeks, but he has a special physique, he always recuperates quickly. He could play tomorrow,” he concluded.