Barcelona kick-start their Liga campaign with a trip to San Mames, follow the game live as we bring you every important kick Live 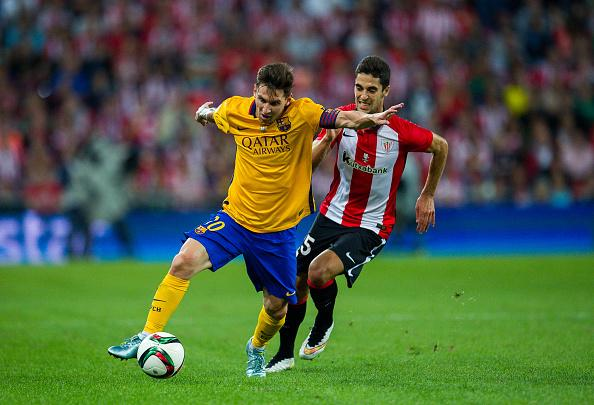 Lionel Messi missed a first half penalty but Barça didn’t relent on their effort as Luis Suarez’ 54th minute volley gave the Catalans a hard-earned victory at San Mames. I’m Ossai Precious, and thanks for being with me throughout the game. My twitter handle is @BarcaLens, you can follow up and @ me let’s discuss the post-match! Bye!

FULL TIME: A tough game at the San Mames as the referee blows the final whistle. Suarez’ goal the difference. Athletic Bilbao 0-1 Barcelona.
90+2′ Free kick for Barça as Suarez goes down under a challenge. Still 0-1.

87′ Wow! Wonderful football from Lionel Messi as he moves through the Athletic defence but fires straight at Iraizoz.

83′ Injury scare for Barça as Andres Iniesta goes to ground in pains but gets up and continues.

81′ Sandro comes on for Rafinha who didn’t have a bad game.

79′ Athletic come Close! Ibai Gomez fires a half volley after Bilbao wins an air duel, but the shot goes over the bar.

77′ Athletic are giving a fight here. Creating half chances. Barcelona will be happy with a 1-0 scoreline at San Mames.

74′ Yellow for Luis Suarez after a foul and he seems to be wasting time.

72′ A good chance for Bilbao as good defending keeps Eraso out.

66′ Blow for Barça as Sergio Busquets is stretched off with an ankle injury. Replaced by Marc Bartra.

63′ Athletic have exhausted their substitutions as Velverde brings Ibai Gomez and Guurpedui on. Still 1-0 to Barça.

60′ A rocket from Sergi Roberto hits the crossbar after good play by Rafinha.

58′ Sergi Roberto has been really impressive at right-back so far, the youngster is not playing in his natural position but has been fantastic so far.
54′ GOOOOOAL! Luis Suarez! A good cross from Jordi Alba picks out Suarez free in the box who fired in a left-footed volley. 0-1!

45′ Barcelona get the 2nd half underway!

HALF TIME Half time at the San Mames! Barcelona failed to get the lead after Messi missed a penalty. 0-0

42′ Barcelona counter after an Athletic corner. Messi sends a perfect pass to Suarez whose shot is blocked.

36′ Messi takes it, Bilbao wall blocks it but the referee insisted on another freekick.
35′ Free Kick for Barça in a dangerous area.

34′ Almost for Barça! Sergi Roberto does well on the right to square the ball to Suarez whose shot was saved by the fingertip of Iraizoz.

29′ Penalty for Barça!!! Luis Suarez gets fouled in the Athletic Box and the ref points to the spot.

19′ Bad News for Barça here! Dani Alves can’t hold the injury off and comes off for Sergi Roberto. A blow for Barcelona.

18′ Dani Alves returns to the pitch after the knock, relief for Barça! Sergi Roberto was warming up earlier.

15′ Dani Alves is holding his groin muscle, seems he’s picked up a knock. Would be bad news for Barça if he’s injured.

11′ Ten minutes have past, Barcelona having possession but not creating much chances.

4′ Athletic putting pressure on Barça but the Catalans are keeping the ball well. They are being more careful here.