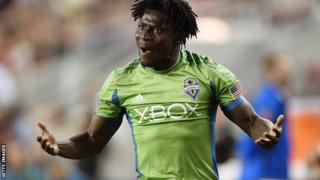 Obafemi Martins has revealed that he is ready to return to the Super Eagles after being shut out of the team for two years.

The Seattle Sounders striker last played for Nigeria in 2013 but has admitted that he cannot turn his back on his father land if his services are required, especially since Stephen Keshi is no longer the Super Eagles coach.
“Things have changed at home and if the new coach [Sunday Oliseh] said he wants me to play for Nigeria again, I’d jump at the chance,” Martins told BBC Sport.
“The opportunity to represent a country of over 170 million people doesn’t come often and I will never turn it down.[post_ad]
“But right now I’m just focusing on giving my best to Seattle Sounders and take it from there.”
The former Inter Milan and Newcastle star insists that he never retired from international football, in spite of being left out of the 2014 World Cup squad when his form justified a call-up.
“I am a Nigerian and playing for my country is always an honour,” he added in the BBC report.
“I never announced my retirement, as wrongly reported. I was a bit disappointed to be treated like a Nigeria outcast but it was not enough to push me into an early retirement.
“I know if I have a good, successful season with Sounders and Nigeria come calling, fair enough. If they don’t, then hopefully I’ll have something big to celebrate in Major League Soccer.”