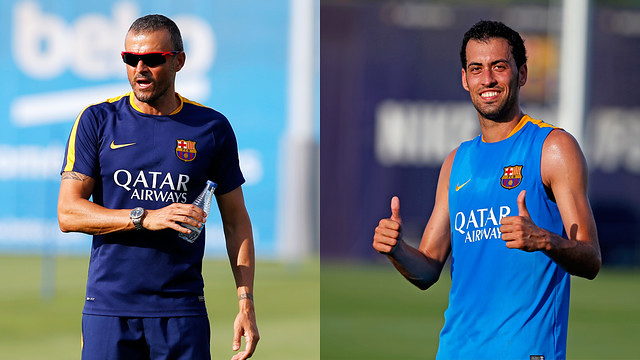 After a hard-earned 1-0 win over Athletic Bilbao in their first Liga game of the season, Barcelona’s joy was soured by the injuries of Dani Alves and Sergio Busquets as both players were forced off the pitch replaced by Sergi Roberto and Marc Bartra respectively.

After the injuries, early reports stated that Sergio Busquets could be out for up to 15 days with Dani Alves set to be out for one month. However, further tests by the Barcelona medics the next day revealed that Busquets has no serious injury in his ankle as earlier suspected but Dani Alves has sustained a groin problem although the length of the injury wasn’t specified.

Moreover, Sergio Busquets trained normally with the Barcelona squad without any pain or disturbance in his ankle and is set to be fit for Barcelona’s next Liga game against Malaga at the Camp Nou on Saturday.

Lack of depth in Barcelona squad that faced Bilbao on Sunday was clearly noticed as Luis Enrique posed the weakest Barcelona bench in the club’s recent history as it consisted of B-players Gerard Gambau and Camara alongside newly promoted youngsters Munir El Haddadi and Sandro Ramirez with third string Marc Bartra and Sergi Roberto joining them.

Luis Enrique will be very happy to see one of his most important players escape an injury scare as he aims to defend Barça’s Liga title.

Another good news is the availability of Brazilian winger. The 23-year-old was diagnosed with Mumps two weeks ago but is set to return to action this weekend according to Mundo Deportivo.

Neymar is yet to feature in an official game for Barcelona this season with his last game on a Blaugrana shirt against AS Roma in the Joan Gamper Trophy. His presence is a huge boost for the Catalans as his supposed replacement, Rafinha Alcantara is struggling at left wing as a result of him being a left-footer.

Neymar who scored 38 times last season, will join Messi and Suarez to complete the fearsome 122-goal trident when Barcelona take on Malaga at 8:30pm CET at the Camp Nou on Saturday.