The Blaugranes will be gunning for a revenge when they host Javi Garcia’s men at the Camp Nou, a team which beat them in this fixture last season 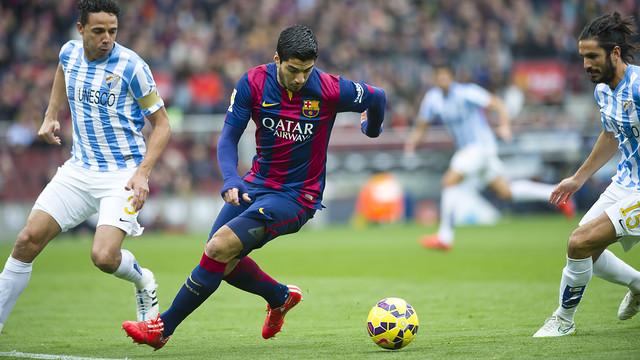 FC Barcelona welcome Malaga to the Camp Nou for their first home game of the La Liga season and they hope to take a revenge for their shock 0-1 home loss against Javi Garcia’s men last season.

A lone goal by former Malaga player Juanmi (now at Southampton) after a defensive mistake by Dani Alves ensured they secured an unexpected 1-0 win over the Catalans in 2014-2015, the first leg ended 0-0.

However, Luis Enrique’s men come into the game knowing the threat posed by Javi Garcia’s side, and they hope to put the result of their last season clash behind them and get their second win of the Liga season.

Malaga played a scoreless draw at home against Sevilla in their first game of the season while the Catalans secured a slim 1-0 victory over Athletic Bilbao. A 54th minute close-range volley from striker Luis Suarez covered the blemishes of Lionel Messi’s penalty miss and ensuring his side get their first three points of the season and it’s a precious one due to the fact that it was gotten from San Mames, a tough venue.

Barcelona will be without key man Gerard Pique as the defender continues serving his four match suspension after an appeal made by Barcelona to reduce the length of the ban was rejected. However, with the recent form of Thomas Vermaelen, the Spaniard will not be missed that much as the Belgian showed in San Mames that he’s capable of filling for Pique.

Also, right-back Dani Alves will miss the game through a groin injury, the Brazilian was forced of the pitch on 20 minutes against Athletic Bilbao and was replaced by Sergi Roberto who was perfect at that position throughout the game. The young star is also likely to start in today’s game and will play for a long time as the Brazilian defender is set to miss the next four weeks of action.

Defenders Douglas Pereira and Adriano Correia are still out through injuries and with Aleix Vidal and Arda Turan still eligible to play due to the FIFA ban, Luis Enrique will be forced to include any of Gerard Gambau, Sergi Samper or Camara to the first team squad for the game.

The good news for Barcelona is the return of star forward Neymar to full fitness. The Brazilian has been out for the last two weeks after being diagnosed with Mumps. He missed the three Super Cup games as well as Barcelona’s Liga opener but is set to return to action and complete the 122-goal Messi-Suarez-Neymar trio against Malaga tonight.

Another injury boost for the Catalans is the availability of defensive midfielder Sergio Busquets who was feared to have sustained an ankle injury in the win against Bilbao. However, the midfielder has shoved off the knocked and has trained normally in the past few days, he is fit for the game tonight.

Malaga have less injury concerns to bother about but they will be without their key man Ignacio Camacho who was also out through injury in the win at the Camp Nou last season.

Malaga were the only team against which Barcelona failed to score in two legs last season. They still have the defensive spark and have showed it in their first game of the season after keeping a clean sheet against Europa League champions Sevilla. Luis Enrique is aware of their defensive qualities but will have something to be confident as he has the likes of Messi, Suarez and Neymar in his ranks.

The Argentine won the prestigious UEFA Best Player in Europe award for a record second time on Thursday grabbing a record 97% of votes. However, he will be hoping to open his Liga goalscoring account after firing blank and missing a penalty last week against Bilbao.

Messi’s UEFA Best Player in Europe trophy as well as Barça’s European Super Cup trophy will be presented to the Camp Nou fans before kick-off.

FlyBarca Prediction: Barcelona didn’t find it easy last season and won’t find things easy today either, but only a brave man will place his last £40 against them. Barcelona will win this.
Barcelona 3-0 Malaga.